Toward the realization of the Sixth Strategic Energy Plan, the Ministry of Economy, Trade and Industry (METI) has started the new development of the environment for PV dissemination to facilitate and accelerate the large-volume introduction of renewable energy.

Based on the “Recommendations of the Study Group on the Appropriate Introduction and Management of Renewable Energy Power Generation Facilities” (July 2022) jointly compiled by METI, the Ministry of the Environment (MoE), the Ministry of Land, Infrastructure, Transport and Tourism (MLIT), and the Ministry of Agriculture, Forestry and Fisheries (MAFF) as the joint secretariat, METI sorted out the issues that require institutional review from three perspectives as follows: 1) the introduction of renewable energy in harmony with local communities; 2) the large-volume introduction of renewable energy, and 3) the next-generation power network. The Working Group on Renewable Energy as a Long-Term Power Source in Harmony with Local Communities was newly established as a council to promote thorough penetration of business discipline and specialized discussions on measures to maximize the use of existing renewable energy generation facilities speedily.

Regarding the introduction of renewable energy in harmony with local communities, the following measures are listed to be taken: 1) making it a requirement to obtain permits and approvals in accordance with related laws and regulations for approval under the Act on Special Measures Concerning Procurement of Electricity from Renewable Energy Sources by Electricity Utilities; 2) withholding of the issuance of electricity sales revenue in violation of related laws and regulations; 3) strengthening of cooperation among systems up to the removal and disposal of used PV modules, and 4) the obligation to hold preliminary briefings for local residents of the introduction of the system. Regarding the large-scale introduction of renewable energy, the following measures are proposed: 1) exemption from the tender process under the FIT and FIP programs for maximum introduction to optimal locations; 2) revision of purchase price rules to encourage the renewal and expansion of PV modules for the effective use of existing renewable energy; 3) revision of the rules for retrofit installation of storage batteries for power generation facilities approved for shifting to the FIP program to promote the supply of renewable energy according to supply and demand, and 4) making low-voltage PV power plants subject to the FIP program. For the establishment of the next generation electricity network, grid management based on master plans, etc., and advancement of grid connection and utilization are included.

Until now, it is no exaggeration to say that the amount of PV power introduced in Japan under the feed-in tariff program was the whole amount installed in Japan. However, Japan is now moving to a new stage based on the “Sixth Strategic Energy Plan” and the “Plan for Global Warming Countermeasures,” and it is expected that the installation will become more diversified in the future, as shown in Table 1. Previously, the amount of PV power generation introduced in Japan was accurately captured each year by the amount of approved PV power generation projects and the commissioned capacity, which are collectively managed by the Ministry of Economy, Trade, and Industry (METI ). However, the introduction from now on will be wide-ranging, including the start of operation of PV projects which have not started operation for a long time under the former FIT program, introduction under the current FIT/FIP programs, introduction with budget and subsidy based on measures under the jurisdiction of each ministry, introduction with subsidies solely by local governments, introduction by the public and industry that do not receive introduction support such as introduction using the PPA method, additional introduction by repowering, removal due to the end of useful life of facilities, natural disasters, etc. If the rules for recording are not determined, it will be difficult to grasp the installed capacity.

At present, the majority of the introduction is made with the support of the former FIT program, the current FIT and FIP programs, as well as budgets and subsidies from each ministry, so it is possible to grasp and manage the installed capacity by consolidating the results from each ministry into the commissioned capacity based on the project certification. However, it is expected that the introduction using the PPA method for self-consumption will become more widespread in the future, and it will gradually become difficult to grasp the installed capacity. PV power generation has a national goal to become a main axis as a renewable energy power source, and understanding the installed capacity is important not only as a basic figure for the formulation of energy and environmental policy, but also as a basic information for future PV power generation projects, including highly accurate prediction of power generation amount and grid operation of distributed power sources over a wide area, daily power supply and demand management, and ensuring local energy and safety. It is necessary to urgently establish a centralized management mechanism for the PV installed capacity that assumes such a situation.

As described above, Japan’s PV power generation will be voluntarily introduced by consumers as a distributed power source hereafter, and the introduction expansion with repowering will be expanded, and the decrease due to removal will gradually be mixed. In order to achieve the target installed capacity by 2030 and further to form a decarbonized society, it will be necessary to establish a mechanism for grasping and disclosing basic information related to PV power generation, such as annual installed capacity, power generation capacity, capacity utilization rate, and annual power generation amount based on these targets, through public-private cooperation at an early stage. 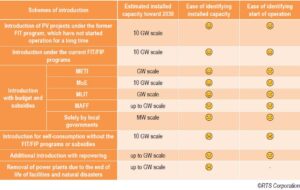