Prospects of the PV market in 2019

The year 2019 which concludes the 2010s for PV has started. The global installed capacity which started at 17 GW in 2010 has expanded to the100-GW level, and installed areas are spreading all over the world. PV is one of the mainstream power sources today, which is supported by every field such as policies, suppliers, consumers and financial sectors as a democratic energy. The use of PV is becoming more popular and PV takes charge of supplying electricity.

With the rise of manufacturers from emerging countries such as China, the supply and demand gap of PV cells/ module which took place in the early 2010s caused the remarkable drop of PV cell/module prices and numbers of PV manufacturers of Japan, the USA. and Europe were forced to withdraw. However, this became a huge driving force of expanding installation of PV systems, and the PV power generation cost started to decline rapidly towards the competition with conventional energies. In 2015, PV realized the watershed level of power generation cost which makes PV a mainstream power source and the global installed capacity started increasing rapidly thereafter. Although the global expansion of PV installation had stopped in 2018 due to the PV policy change in China, there is a sign of movement for further development of PV, as shown in Table 1. The year 2019 will be a crucial year to prepare for the further remarkable development in the 2020s. 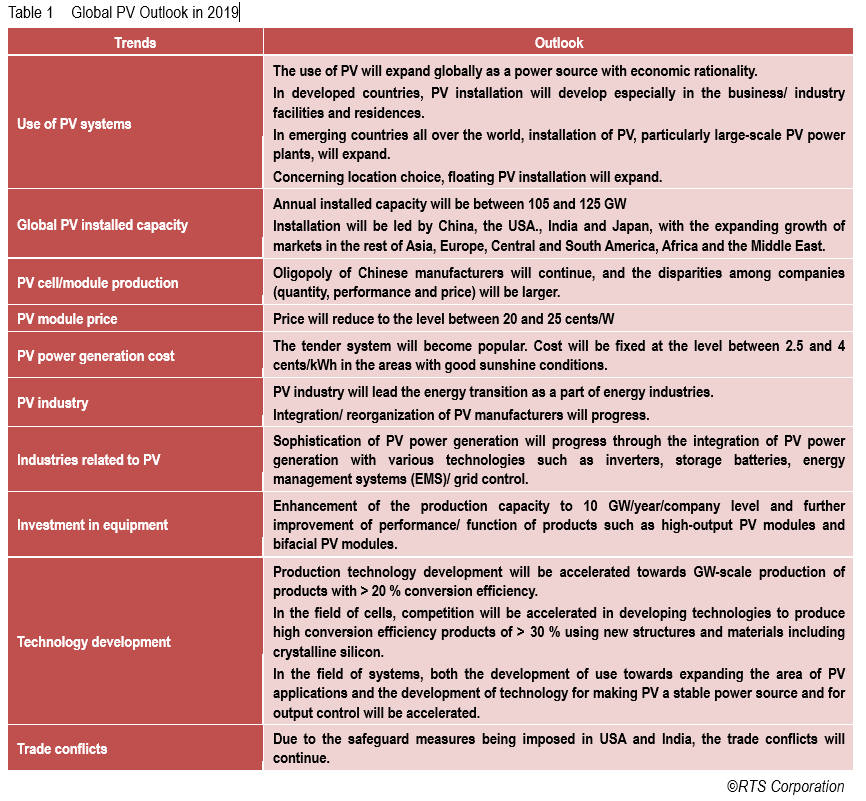 In the use of PV power generation, PV will become more and more competitive with the conventional energies, as PV module price declines to the level between 20 cents/W and 25 cents/W, and installation of PV systems will increase especially in emerging countries and the market competition-based installation, which is independent from support such as the FIT program, will expand. Floating PV systems are being focused recently as a new installation style which will increase both in developed and emerging countries. As the tender system becomes popular, the power generation cost will be fixed at the level between 2 cents/W and 3 cents/W in the areas with good sunshine conditions. On the other hand, in the markets of developed countries, installation is increasing especially in the commercial and the industry facilities as well as residences, while the development of PV systems coupled with storage batteries as distributed power sources is growing. These trends will consolidate a foundation towards making PV a stable power source and developing advanced use. The PV industry will lead the energy transition hereafter, as one of the energy industries which cooperates with related technologies and industries such as electricity storage, energy management and IoT sectors. The competition of PV manufacturers has already begun, aiming to establish a 10-GW/company scale production framework, and the movement of investment and reorganization/ integration will become active to survive the 100-GW era.

In Japan, the year 2019 is the second year for the Fifth Strategic Energy Plan and it will be a turning point year where the business environment is supposed to change drastically towards the independence from the FIT program. As the new rules will be applied to the FIT-approved projects which have not started operation (purchase price ranges between 32 Yen/kWh (29.4 cents/kWh) and 40 Yen/kWh (36.8 cents/kWh) under the former FIT scheme), early installation or cancellation/ revocation of large numbers of PV projects are expected. In addition, the purchase price for the 10 kW and < 500 kW projects will be reduced largely from 18 Yen/kWh (16.5 cents/kWh) to 14 Yen/kWh (12.9 cents/kWh). In the tenders starting from FY 2019, the range of the projects subject to the tender system will be widen from ≥ 2 MW to ≥ 500 kW and the capacity will be limited to 750 MW/year. Furthermore, since the electricity purchase at 48 Yen/kWh (44.8 cents/kWh) will be expired for 530,000 PV systems with a capacity of 2 GW in total of all the existing residential PV systems, a new measure is necessary to address this issue. As described above, the PV business environment in Japan will be more difficult than ever. However, considering the increasing burden of the nation, making PV a mainstream power source without restriction and the development of PV in the future, these issues should be regarded as inevitable barriers that need to be tackled. Under such circumstances, the conventional simple trade of PV systems will come to an end and new business models which meet the needs of consumers based on the knowledge and technologies are required. The trends of PV systems will shift from the ground-mounted MW-scale PV systems for the power sales business which are accompanied by large-scale development, to a new era of rooftop systems for installations on  buildings with electricity demand, the systems f for supplying electricity in the neighborhood (PV systems for integrated demand and supply), and the virtual MW-scale PV power plants which connect the above-mentioned systems with the communication function. In addition, concerning the demand/ supply integrated markets, consideration for safety/ security will be more necessary than ever, although safety/ security of PV systems had been taken for granted.

Let us make the year 2019 a turning point year to work towards the stable development and complete independence in the 2020s, preparing for the next stage of PV dissemination.