The FY 2018, which ended in April 2019, was a milestone fiscal year for the energy history of Japan, with the Cabinet Approval of the Fifth Strategic Energy Plan which states that Japan is committed to making renewable energy a mainstream power source. Following the formulation of the Fifth Strategic Energy Plan, the Subcommittee for Large-volume Introduction of Renewable Energy and Next Generation Electricity Network started discussions on making renewable energy a mainstream power source and made the second interim report based on five perspectives as follows: 1) Acceleration of cost reduction and independence from the FIT program; 2) Securement of long-term stable business management; 3) Grid restrictions; 4) Adjustment capabilities; and 5) Pursuit of industrial competitiveness and technology innovation. However, the discussions at the Subcommittee aims to ensure realization of the 2030 energy mix of Japan, and are limited to the measures to be implemented within Japan, so the perspective of the industry’s global development is not covered.

The annual global PV market has grown to the 100 GW scale, and it is expected to expand to the 200 GW scale in the 2020s. The main driver of this growth is presumed to be the Asian region having large population and being under economic development.

As the world promotes to invest in renewable energy whose cost is continuing to decrease, Japan will also face a period, in the 2020s, for the industry and the government to cooperate in the PV market where use of PV as centralized power station and distributed power generation system, will gather momentum worldwide. In order not to lag behind Europe, the USA and China that are promoting development in the expanding global market, strategies and action programs for acquiring the market are urgently needed.

The overseas development of the electricity business has been promoted as part of the Initiative for expansion of high-quality infrastructure export under the Ministerial Meeting on Strategy relating Infrastructure Export and Economic Cooperation (Keikyo Meeting) led by the Prime Minister’s Office, and the Ministry of Economy, Trade and Industry (METI) announced the overseas development strategy in the electricity sector at the 33rd Keikyo meeting (October 2017). Then, at the 36th Keikyo Meeting (April 2018), expansion of public support for renewable energy was listed as a measure to increase orders related to the overseas energy infrastructure. Furthermore, at the 41st meeting (February 2019), continuous involvement in the business, i.e. from sales-only model to operation, including reinforcing efforts such as participation in management, optimized corporate partnerships and enhancing solution functions in the growing areas such as renewable energy and the areas where Japan has strengths, was launched as the future direction. In this way, direction of the government to focus on the overseas renewable energy development is increasing year after year.

As for the overseas PV development, as shown in Table 1, the funding support program by the Ministry of the Environment (MoE)’s Joint Crediting Mechanism (JCM) to support the deployment of technology to reduce greenhouse gas emissions to developing countries is playing the main role. Records on construction of MW-scale PV power plants and installation of rooftop PV systems which Japan has an advantage are increasing through JCM projects. Since the start of the FIT program, Japan has been developing technologies responding to the scale, application, location, installation method, grid management, etc., under various conditions and environments and has their track records. These achievements should be utilized to acquire overseas markets that are starting to grow in full scale.

Fortunately, since renewable energy was positioned as a mainstream power source-to-be in the Strategic Energy Plan, conventional energy industries, such as electricity, gas and trading companies have been streaming into the renewable energy business, which is broadening the scope of the Japanese PV industry. Overseas development may become aggressive by use of the knowledge, experience and technology held by some of these new entrants that already have records of overseas business expansion. Also, overseas development including design and maintenance of schemes not only for PV systems but also for renewable energy as a whole may be conducted from the perspective of partner countries under the support framework through collaboration between the public and the private sectors.

The growing global PV market is providing us the opportunities and the challenges to utilize our abundant track records of PV introduction and grid management experiences accumulated in the Japanese market with a large pillar of high-quality energy infrastructure technology. International competitiveness of the industry may be increased and the attention of the private sector to invest in PV can be attracted by differentiation with the high quality technology, covering not only PV system installation but also operation of PV systems as a package, and by positioning them as a tool to support developing countries. The PV industry, collaborating with the national government, should set out strategies and targets on export to acquire the global market in the 2020s in addition to the domestic market, and prepare for the future development of PV industry and the international contribution. 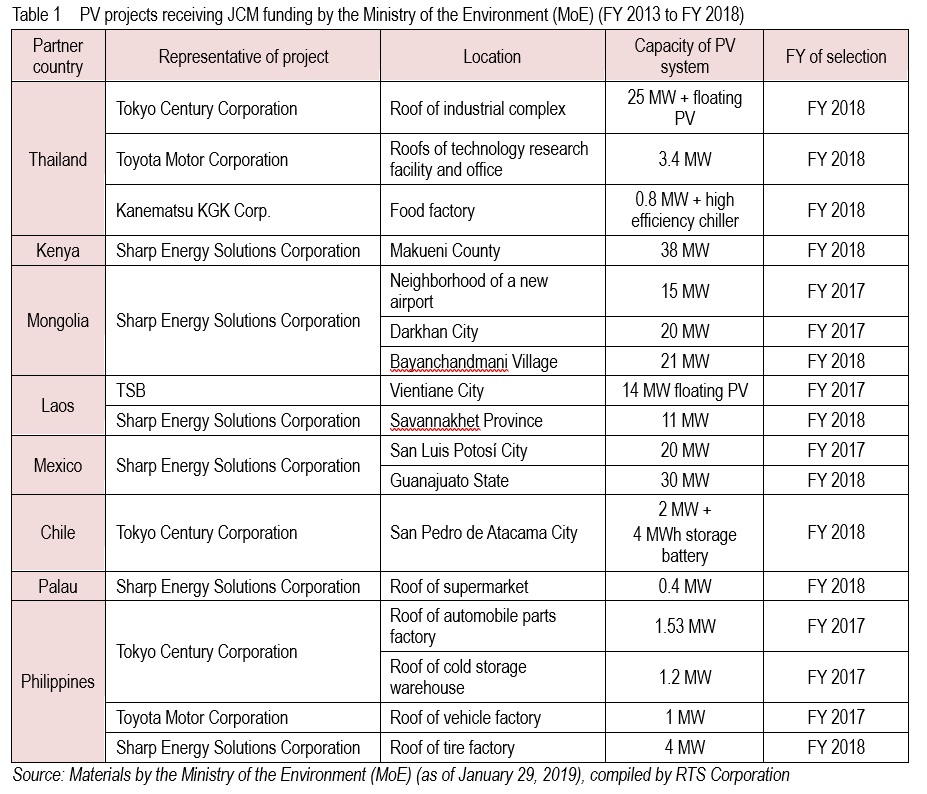