The PV business environment in Japan is going to change radically. Since the start of the FIT program in July 2012, the large-scale PV project development for selling electricity has been established, driving the mass introduction of PV in Japan. However, the change of the PV business environment is inevitable, and as a prerequisite, it must gain support from the nation hereafter. The Ministry of Economy, Trade and Industry (METI) is currently working on the reconstruction of renewable energy policies considering its independence from the FIT program and the new policies will be designed based upon the following three fundamental principles: 1) further cost reduction and curbing of the national burden; 2) long-term stable operation and 3) integration with the electricity system. The new scheme based on the radical review is expected to be applied from April 2021. Although the direction of the renewable energy policies towards expanding introduction and establishment will not change, the focus of PV utilization will shift from the expansion of quantity to the pursuit of quality. The ability to respond to this change will be the key to the successful development of the PV business hereafter.

Japan’s PV installed capacity is estimated to be 55 GW-scale as of the end of FY 2018 (March 2019 ). Until the early 2020s, large-scale PV systems are estimated to be the mainstream of PV installations, with a large number of FIT-approved PV projects which have not started operation. However, the mainstream of the PV market will shift from the conventional business of selling electricity generated by MW-scale PV power plants, in the first half of 2020s. As shown in the Figure 1, taking advantage of the features of distributed generation systems, PV utilization with integrated supply and demand, which is based on self-consumption and local production/ local consumption, will expand and become the mainstream of the PV market. At present, the preparations for the business development foreseeing the future changes of the market seems to be delayed because the PV industry in Japan has been preoccupied with the handling of the projects which have not started operation. However, when the market with integrated supply and demand could successfully develop to become the next growing market, PV installed capacity of 100 GW will be a realistic goal by around 2025. 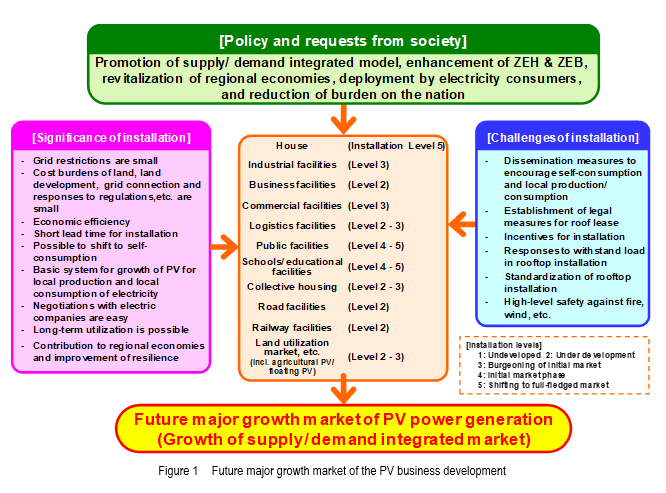