One year has passed since the Fifth Strategic Energy Plan was approved by the cabinet. In half a year, PV power generation will enter the new development phase of the 2020s. So far, the global PV industry has put all its energies into cost reduction, improvement of conversion efficiency to reduce the cost, GW-level mass production, as well as establishment of schemes for dissemination. After a long period of time, PV electricity has finally achieved the economic efficiency which is equivalent to or higher than that of conventional energy sources. Now that the PV power generation has satisfied the minimum requirements to be used as an energy source, it has started developing itself to become a mainstream energy source. While the pursuit of further cost reduction will continue, the era of large-scale utilization of PV power generation is expected to arrive, where lower-cost PV systems will penetrate into the industry, living and society.

So far, PV power generation has been growing with cost reduction and support measures for dissemination, focusing solely on the expansion of PV installed capacity. If we assume the era of such circumstances as x-axis (horizontal axis) of the graph,  future developments on y-axis (vertical axis) are required, which will enable large-scale utilization of PV as a responsible energy source, including expansion of application areas, additional functions other than power generation, establishment of long-term stable management, overcoming of grid restrictions and so on. As shown in Figure 1, PV power generation is expected to become a true mainstream power source in name and in reality, through deepening pursuit of developments on x-axis and future pursuit of developments on y-axis. Globally, the pursuit on y-axis has just begun. PV will not be able to become a mainstream power source only with its strengths in manufacturing or low prices. The y-axis shows the expanding capabilities of PV power generation, and the comprehensive capabilities from the perspectives of policy, industry, technology, market, finance, installation sides and application areas will be tested on y-axis. Fortunately, the areas where these comprehensive capabilities are required are also the areas where Japan excels in. On x-axis, Japan was overtaken by China and other countries in the PV cell and module manufacturing. By largely expanding y-axis while borrowing the capacities of other countries on x-axis, Japan will be able to lead the world once again, by realizing unconstrained PV introduction. With the rapid and large-scale introduction of PV systems as a most-developed PV nation, Japan is facing significant national challenges such as increasing the national burden and grid restrictions. Accordingly, the knowhow of overcoming the challenges which Japan will obtain by addressing these challenges ahead of others, is expected to boost Japan to regain its status as a leading nation in PV utilization and to make profits.

Based on the Fifth Strategic Energy Plan, the Ministry of Economy, Trade and Industry (METI) compiled the second interim report to realize expansion of renewable energy introduction (Phase 2), and started working on the drastic review of the FIT Act scheduled in the end of March 2020, including reconstruction of renewable energy policy, which the Japanese government positions as Phase 3.

In the future renewable energy policy, it is expected that different policy measures for five different power sources will be taken to suit the characteristics of each power source. Regarding PV power generation, discussions are underway to prepare for the post-FIT era, including the measures to promote the “integrated supply and demand model.” As such, the Japanese government started improving the environment from the policy side as well to focus on the quality of PV as a mainstream power source, shifting from focusing on quantity expansion, by recognizing the significance of not only x-axis but also y-axis.

By strengthening development of y-axis, in the national land development projects and measures managed by the cabinet, related ministries and agencies, it is estimated that anti-global warming measures, solar sharing, activities on ZEH and ZEB will be promoted, which will lead to expanding application areas and formats. From the introduction and utilization sides, it is expected that the stream of introduction expansion from the consumer side or the financial sector will be accelerated through cultivation of new social trends such as RE100, SDGs and ESG investment. In the industry, the PV industry of the 21st century will be created, which plays a part of the energy industry, covering the areas of device manufacturing, EPC, power generation business and the O&M business. This will increase international competitiveness of PV power generation and help making it a mainstream power source. Furthermore, from the technology side, with the integration of PV with other technologies such as IT, AI, IoT, electricity storage and drones in addition to sophistication of PV technologies, the possibility of realizing long-term stable operation and overcoming of restrictions will increase, which had been impossible to realize with PV power generation by itself. 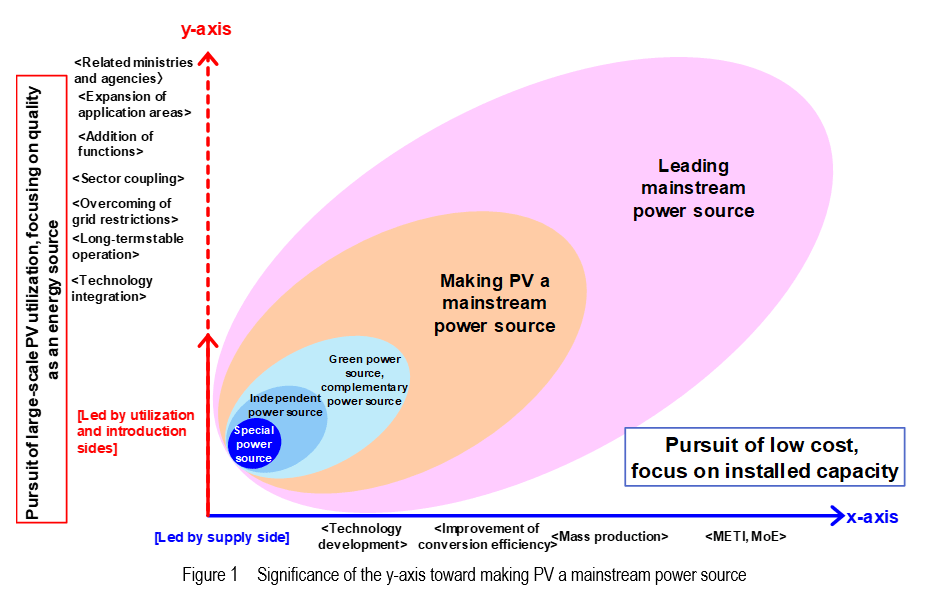