The 2010s is over and the 2020s has begun. In the 2010s decade, the global PV market experienced a dramatic development to exceed 30 % annual growth rate. The leading PV trends in 2019, the last year of the 2010s, are shown in Table 1. PV introduction independent of government support started to progress overseas. From 2020, the Paris Agreement is scheduled to be implemented in full scale and stable growth of the PV market is expected to be maintained. 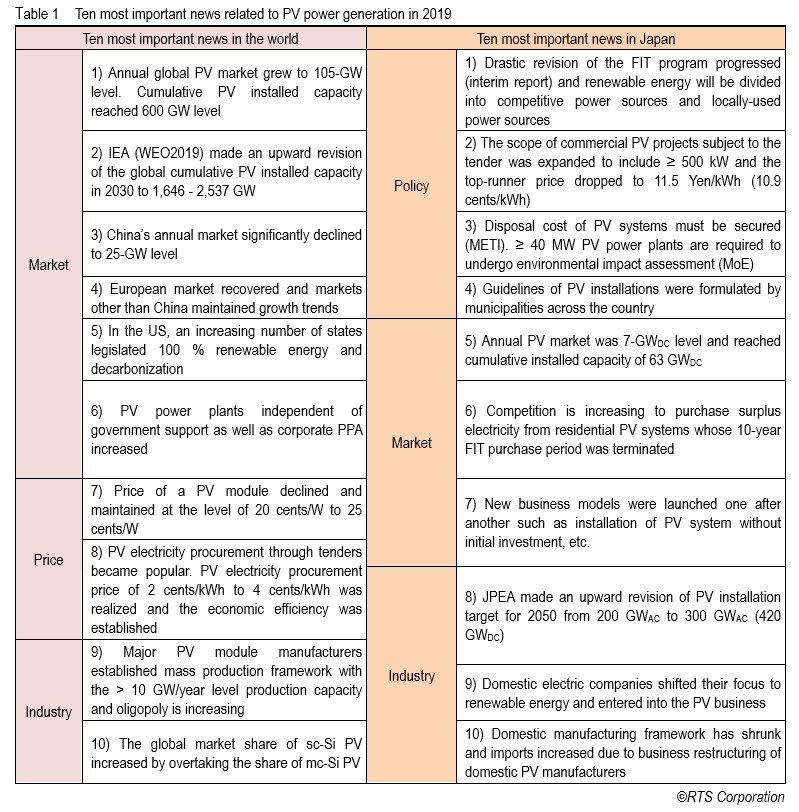 As for the global trends of the PV market, in 2019, even though the Chinese market which had driven the growth of the global PV market saw a significant negative growth for the second consecutive year, 105 GW-level of introduction is expected globally following the growing PV introduction around the world. Recovery of the European market that has been sluggish became visible, the markets in Asia excluding China and the US market showed a steady growth, and growing trends are maintained in Latin America, Africa and the Middle East driven by active demand.

The price of a PV module continues to decline due to the sluggish Chinese market and the level of 20 cents/W to 25 cents/W started to be fixed. Introduction of PV through tender process is becoming popular globally and the PV electricity procurement price level of 2 cents/kWh to 4 cents/kWh is realized depending on the irradiation conditions. Consequently, GW-scale PV power plants are being constructed all over the world.

In the PV industry, in preparation for the PV market growth in the 2020s, the latest technologies with price competitiveness are launched and mass production with the production capacity level of 10 GW/year are established mainly by Chinese major PV module manufacturers, and oligopoly is increasing.

In Japan, approximately 7 GW of PV systems were installed in 2019 and cumulative installed capacity is estimated to have reached the level of 63 GW (DC) driven by the increased installation of the FIT-approved PV projects which have not started operation and the declining price of PV installation, etc. The Ministry of Economy, Trade and Industry (METI) established a system to entrust purchase of surplus electricity from residential PV systems whose 10-year FIT purchase period will be terminated (and the number of such PV systems is expected to increase in the future) to the general market as well as determined the direction of the drastic revision of the FIT program towards realization of renewable energy as a mainstream power source. Specifically, the following items will be included in the new FIT Act: 1) establishment of the system in accordance with the characteristics of different power sources; 2) appropriate business discipline and 3) response to the next generation electricity network which supports mass introduction of renewable energy, etc. Hereafter, renewable energy will be divided into competitive power sources and locally-used power sources depending on the characteristics of the power sources to promote the installation and deployment. PV will be categorized into both. PV as a competitive power source will be integrated into the electricity market and PV as a locally-used power source will shift to the utilization of supply/ demand integrated type PV system based on self-consumption and local production and local consumption of electricity. The Ministry of the Environment (MoE) promoted the measures towards achieving a decarbonized society and included PV power plants with a capacity of ≥ 40 MW in the subjects of environmental impact assessment (EIA). Until now, METI and MoE were working on the dissemination of renewable energy from their own standpoints, however, they have launched a cooperative team for full-scale expansion of introduction in the future.

In the PV industry, the Japan Photovoltaic Energy Association (JPEA) released “PV OUTLOOK 2050” as the JPEA’s vision and made an upward revision of expected installation target for 2050 from 200 GW (AC) to 300 GW (AC). New business developments in preparation for the post-FIT era have begun such as business models which enable the installation of PV system with no initial investment. Especially, purchase of surplus electricity from PV systems whose FIT purchase period were terminated and sales of storage batteries, etc. are recognized as new business opportunities. Businesses in the conventional energy industry are making entries into the PV business one after another, shifting their focus to renewable energy.

Year 2020 is the last year of the current FIT Act application and the environment of PV introduction is anticipated to be severe with the change of the requirements for 10 kW – 50 kW low-voltage systems and expansion of the scope of PV projects subject to the tender process. Meanwhile, in the 2020s, bright outlook for market expansion is also expected such as growth of ZEH and ZEB, new market growth including floating PV and agricultural PV applications, etc., accelerated installation by electricity consumers and dissemination through new business models. The industrial structure which was established in the 2010s and the achievement of PV installation as much as 1,940,000 systems with a total capacity of 45.7 GW (as of June 2019) will be the new starting point of the 2020s and the PV industry in Japan will enter a new era for independence. In the 2020s, it is forecasted that there will be a significant change of market structure, industrial structure, business models, forms of application and players due to the change of dissemination policies and the progress of electricity system reform. The PV business will be required to shift to the 2020s version growth model independent of the government support since the growth model of the 2010s which was protected by the government will no longer work. While the FIT-approved PV projects which have not started operation are dealt with and there are government support of the current level, the PV industry should change the acquired experience, technical abilities and sales abilities into a new driving force for deployment, position the community-based supply/ demand integrated type distributed PV market as a mainstream growth market of the 2020s and pave the way for full-scale development unique to Japan.