There is only one month remaining of the 2010s, and the 2020s is about to begin. The 2010s was a decade of progress for PV to pave its way of becoming a mainstream power source.

The development of PV in the 10 years of 2010s is summarized as shown in Table 1. PV progressed at a speed that highly exceeded estimation even compared to the past decades, and achieved a bright evolution in this decade. The global annual installed capacity greatly increased from 17 GW to 110 GW (estimation), and the PV module price also realized a great reduction from $ 1.8/W – $ 3.6/W to $ 0.2/W to $ 0.3/W. The major installing countries were mainly specific developed countries such as Germany, Italy, Japan and US, and the only countries exceeding annual capacity of 1 GW were Germany and Italy. However, today, PV installation is beginning to expand worldwide. China and India also joined the top runner group and the number of countries with more than 1GW installed is close to reaching 20 countries due to renewable energy installation policies by various countries. These drastic developments were led by expansion of countries adopting the FIT program that enables installation expansion in a short period, rapid supply capacity increase and cost reduction by participation of Chinese companies, improvement of performance of PV systems by technology development, in addition to the enactment of the Paris Agreement and investment focusing on decarbonization technology by financial institutions. The social recognition towards PV also greatly changed from “energy that is expensive and requires support but can be used as a power source in the future” to “energy that contributes to the society as a mainstream power source of the future”.

Meanwhile in Japan of 2010, the annual installed capacity was 0.99 GW, cumulative installed capacity was 3.6 GW and the residential PV system price was 560,000 Yen/kW ($ 5,140 /kW). Dissemination was promoted by purchasing surplus power from residential PV system for 48 Yen/kWh (44 cents/kWh). As for the Energy Policy, it started from placing installation expansion of renewable energy as the most important issue and completing the draft towards legislation of the FIT program by formulating the “Third Strategic Energy Plan”. The FIT Act was enforced from July 2012, which later became the trigger for an explosive expansion of PV installation, leading to setting 64 GW as the PV installation target for the 2030 energy mix and formulation of the “Fifth Strategic Energy Plan” that places renewable energy as a mainstream power source. The world’s highest level installation capacity and a great cost reduction were realized. As a result, the annual PV installed capacity is estimated to reach 7 GW (DC), the cumulative installed capacity to reach 63 GW (DC), residential PV system price to reach 250,000 Yen/kW ($ 2,300 /kW) level in Japan as of the end of 2019. During this period, enhancement of efforts by the Ministry of the Environment (MoE), Ministry of Agriculture, Forestry and Fisheries (MAFF), Ministry of Land, Infrastructure, Transport and Tourism (MLIT), etc., establishment of new industries such as industrial/ public/ utility-scale PV system application market, EPC, power sales business, O&M, etc. and installation approaches from the consumer side represented by RE100 were seen. On the other hand, issues that must be overcome as soon as possible such as increase of national burden, grid restriction, symbiosis with the local community, long-term stable operation, reduction of generation cost, etc. are piling due to the rapid installation expansion of PV.

In response to the great development of PV in the 2010s as written above, IEA made an upward revision on the PV installation outlook to 2,537 GW in 2030, 4,815 GW in 2040 (Sustainable Development Scenario) in the “World Energy Outlook 2019”. In the 2020s, full-scale installation of PV in developing countries are expected, in addition to rapid progress of strong efforts by power consumers and fusion with balance-of-system (BOS) including storage batteries. PV will develop with focus on both large-scale power plants and distributed power sources, and will lead the great energy transition along with wind generation as a “power source that balances both economic efficiency and stability”. In Japan today, the drastic revision of the FIT Act is being progressed. However, multi-faced policy deployment that estimates a rapid development of PV in the coming 10 years through not only dissemination/ utilization policies, but also various policies including the industry, technology development, promotion of regional development, export deployment, etc. is necessary. The comprehensive strength of PV that has been built up in Japan should lead the world in establishing a PV society by changing ability to deploy dissemination expansion that focuses on not only amount but also quality. We should learn from the success and failure of the 2010s, and pave the path for a bright 2020s by gathering together all the strength of the government, industry, power consumer, financial industry, and technology development institution. The speed and expansion of PV development in the future should not be misjudged. 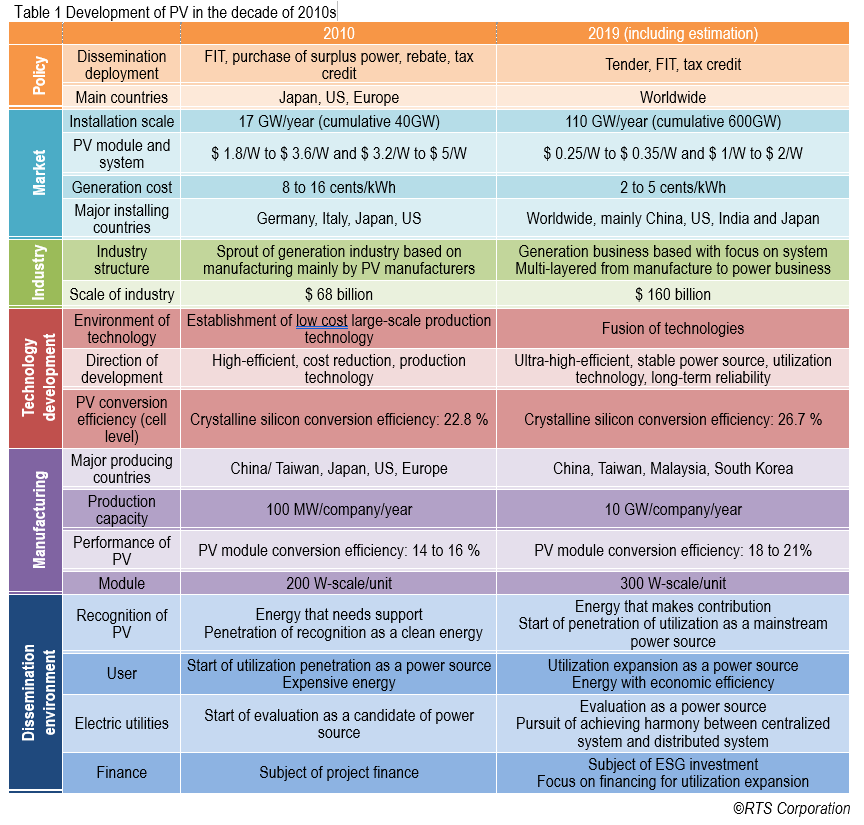