On February 25, 2020, the Japanese government made a cabinet decision on the bill of “Acts for Establishing Resilient and Sustainable Electricity Supply Systems,” which includes the drastic revision of the FIT Act, and submitted it to the 201st ordinary session of the Diet. This bill is designed to make a comprehensive revision of the Electricity Business Act, the FIT Act and the Act Concerning the Japan Oil, Gas and Metals National Corporation (JOGMEC Act), in order to establish a resilient and sustainable electricity supply framework in response to the changes in the environment over electricity supply such as frequent occurrence of natural disasters, a growing tension in the Middle East and the international energy landscape and expansion of renewable energy. The drastic revision of the FIT Act has the following four pillars: 1) establishment of the FIP scheme under which a certain premium is added to the market price; 2) establishment of a scheme to support a part of the cost to enhance the power transmission network by the whole nation in the form of surcharge; 3) obligation to accumulate external funds to cover the disposal cost of renewable energy power generation systems and 4) revocation of approval of the projects which have not started operation for within a certain period after the approval. In the 2020s, the environment of the PV business has largely changed since the enactment of the FIT Act, and the PV installations with market principles and independence from the policy-driven support are required.

Since 2018, we, RTS Corporation has released its proposal for the sound development of the PV industry in February. In February 2018, we released the “PV150 concept”, which analyzes Japan’s electricity supply capabilities and demand for renewable energy-based electricity, and indicates the possibility to increase Japan’s cumulative PV installed capacity to 150 GW by 2030. Then in February 2019, we published “PV150 Action Plan”, as a proposal for specific actions toward achieving PV150. In February 2020, we released the “Development of PV power generation in the 2020s toward coming of the PV society (PV150 deployment capabilities)”, which advocates enhancement of “deployment capabilities” of PV power generation, looking to the period after the achievement of 150 GW installation.

So far, PV power generation has advanced mostly based on the quantitative expansion focusing on the enhancement of supply capabilities and installation capabilities (X axis) through cost reduction and dissemination support measures. These efforts were following the necessary conditions. However, with the strength of manufacturing and low price alone, the development of PV power generation would be limited. For future development, in addition to further pursuit of X axis, it is necessary to shift to two-dimensional development by strengthening investment to satisfy the sufficient conditions or the enhancement of deployment capabilities focusing on the pursuit of wider utilization and applications of PV power generation and the quality of PV as an energy source (Y axis). Through this two-dimensional development, it is essential to make PV power generation a mainstream power source, and advance further to combine PV with the social infrastructure as a sustainable energy technology.

The enhancement of deployment capabilities as the Y axis here means the enhancement of efforts on the following eight essential deployment capabilities as shown in Figure 1: 1) Securing a strong driving force for PV dissemination through combined deployment of related policy measures by the national government; 2) making PV a stable power source by overcoming grid restrictions and forming the next-generation network; 3) establishing PV as a mainstream power source from the operation perspective, through long-term and stable operation; 4) market expansion through expansion of the solution business and enhancement of deployment to the next-generation infrastructure; 5) creation of new market through the partnership between the PV industry and the industries utilizing PV; 6) establishment of the next-generation market by challenging new fields and expansion of utilization fields; 7) creation of independent and distributed society with PV systems for self-consumption through technology development and fusion of technologies; and 8) international deployment by utilizing experiences in Japan. To make PV a mainstream power source, it is essential to comprehensively enhance these efforts. 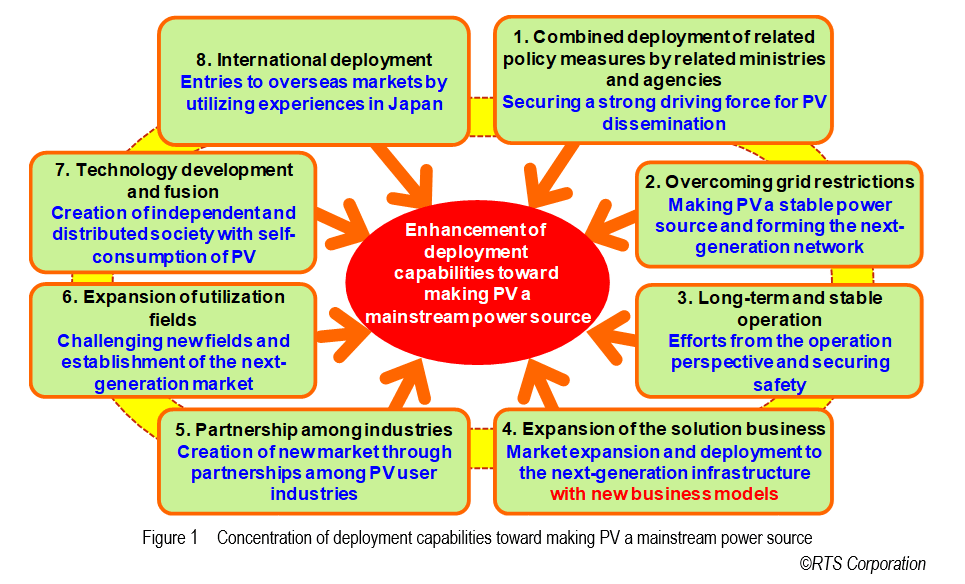 These efforts to pursue the Y axis which will comprehensively improve the deployment capabilities are still in the early stage globally, and these are the areas where Japan would be able to demonstrate its strengths. Japan, overtaken by China and others in the PV manufacturing, might be able to lead the world again toward unlimited PV installations, if it chooses to shift to enhancing the Y axis, while receiving support from other countries  for the near term.

Japan is also a nation that has the most advanced in terms of significant national issues such as the increase in the national burden and grid restrictions due to the too rapid large-volume introduction of PV power generation. For the country promoting expansion of PV installations, these issues cannot be avoided. However, the above-mentioned efforts to enhance deployment capabilities are also the efforts to solve the issues, which will lead to establishing a sustainable energy society in the future. If Japan addresses these issues ahead of others, the knowhow will be accumulated, which will contributed to the era of large-volume PV introduction around the world, and will also bring about the competitiveness (earning power) of Japan’s industries.