emailContact file_downloadDownloads
HOME > Monthly Perspective > PV will evolve into a primary energy source toward 2050 (toward the stage of PV5.0)

PV will evolve into a primary energy source toward 2050 (toward the stage of PV5.0)

In January 2020, the Japanese government formulated the “Progressive Environment Innovation Strategy” aiming for realization of a decarbonized society and set 39 development themes on 16 technical issues in five areas, which are important as innovative technologies to be established by 2050. The “Green innovation strategy promotion meeting (tentative name),” a cross-ministerial meeting was established as a headquarter for R&D implementation, and the “International Joint Research Center for Zero-Emission Technologies” was established within the National Institute of Advanced Industrial Science and Technology (AIST) as an R&D base. The area of “energy transition” which consists of five technological developments is the first pillar of the five important areas. In this area, it is clearly stated to “make renewable energy a mainstream power source through drastic improvement of efficiency and lowering of cost of PV power generation using new materials and structures,” and “realization of flexible, lightweight and highly efficient PV power generation that overcomes the restrictions of installation sites” was set up as the first theme.

Furthermore, in February 2020, the New Energy and Industrial Technology Development Organization (NEDO) formulated the guideline called the “Comprehensive R&D Principles for Sustainable Society 2020” which shows a direction which the future technology development should aim for and positions the next-generation PV power generation as a sustainable energy source with significant CO2 reduction effects.

The background of such movement lies the expectation the PV will become the cheapest power source globally after the drastic reduction in the cost of PV in the 2010s which realized 2 to 4 cents/ kWh for electricity procurement price through the tender process in the regions with high solar insolation. Hereafter, PV is increasingly expected to significantly expand the forms of utilization as a leading source of renewable energy aiming to become a mainstream power source and at the same time, innovation toward the establishment of a decarbonized society is required.

It is expected that the PV power generation will evolve as shown in Table 1. The forms of PV utilization will evolve from PV0.0 to PV5.0 depending on the stage of development as a power source. 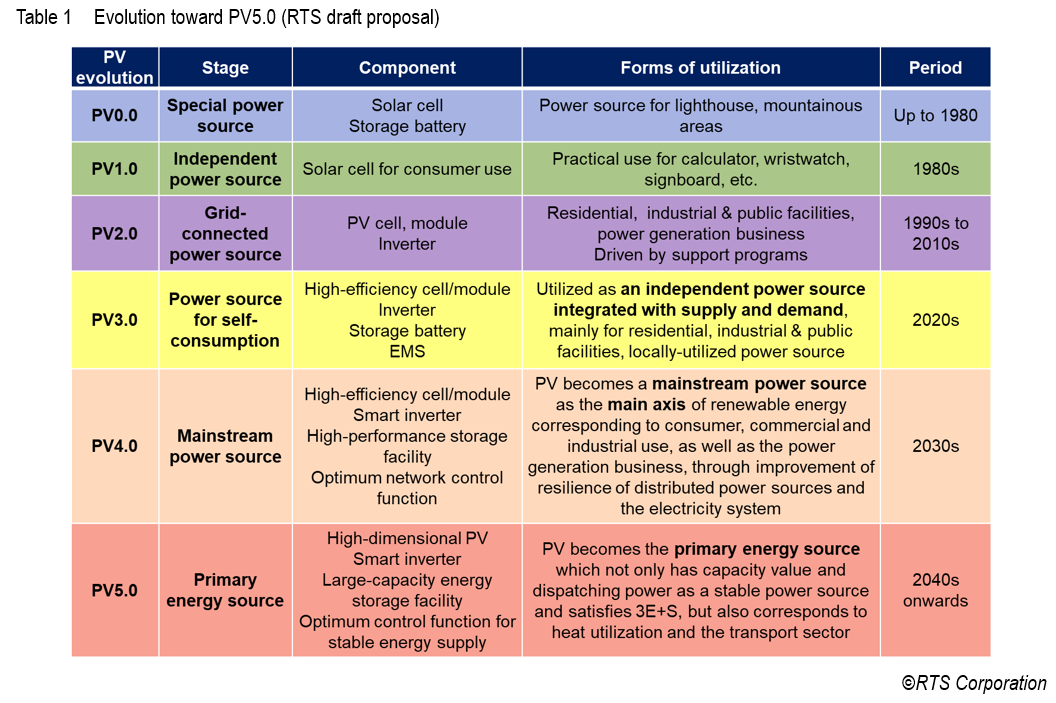 The utilization of solar cells, invented in 1954, began from the stage of PV0.0 as a “special power source” associated with specific applications, and advanced to the stage of PV1.0 where solar cells started to be installed in consumer devices such as calculators in the 1980s as an “independent power source.” After that, with performance improvement and advance of mass production technology, the PV utilization moved to the stage of PV2.0 where PV is used as “grid-connected power source” and PV power generation has spread around the world driven by the support from national governments and cost reduction over 30 years. Now that PV can compete with conventional power sources, PV is entering the stage of PV3.0, where the use of independent and distributed PV systems is expected to expand as a “power source for self-consumption.” Until now, the use of PV power generation has been promoted by solely aiming for the quantitative expansion through low-cost and large-scale production. Now, PV is entering the decade that is important for achieving self-sustained deployment by adding even higher efficiency of PV cells and modules, storage batteries and energy management system (EMS).

In the 2030s, PV power generation will enter the stage of PV4.0 and establish its position of the “mainstream power source” as the main axis of renewable energy by evolving itself into a system that consists of high-performance PV modules, smart inverters, high-performance power storage facilities and optimum network control function, etc. Beyond that, it is expected to advance to the stage of PV5.0, where fossil energy is replaced by PV in electrification of mobility and heat utilization, etc. PV is assumed to enter the stage where it can play a role as a major “primary energy”, not just as electricity.

Currently, the annual PV production volume in the world reached the level of 100 GW and is expected to become reach the level of 200 to 300 GW by 2030. Until the early part of the stage of PV2.0, Japan ranked first in the world in terms of PV production and installed capacity. However, since then, the Japanese manufacturers have lost price competitiveness in the mainstream crystalline silicon (c-Si) PV products against China and other overseas PV manufacturers, and their production share has dropped sharply.

Nevertheless, it is no exaggeration to say that the development of PV is at the stage where it is about to make a full-fledged start. The PV system is the basis of energy supply which support the changes of the society toward 2050 such as Utility3.0, Society5.0, EVs and SDGs. The evolution of PV power generation in the future is expected to jump from the stage of PV3.0 to the stage of PV5.0. With development of new technology-integrated or knowledge-integrated PV systems through new innovation and promotion of the power generation business linked with the society, we will be able to lead the world again.

Challenges by universities and R&D institutes are indispensable for technology development and innovation. We strongly expect the “academia” (in the field of technological research and development) and the national government to propose and implement the roadmap toward realization of PV5.0 which aim for making PV a primary energy by 2050 as PV once reached the level that aims at becoming the mainstream power source through the national “Sunshine Project” which was launched in 1974 with high goals.