Efforts for early realization of carbon neutrality are bringing about an industrial and economic competition among major countries, beyond climate change countermeasures. Today, the energy policy of Japan is entering a critical phase that will determine the next decade. The Ministry of the Economy, Trade and Industry (METI) concluded the detailed design of the Renewable Energy Promotion Act that is scheduled to be enforced from April 2022, and is progressing the revision of the target for renewable energy installed capacity towards formulation of the sixth Strategic Energy Plan that is scheduled to be announced in the summer of 2021. The point of discussion will be realistically how high the target for renewable energy installed capacity, which plays an important role as a mainstream power source for achieving 2050 Carbon Neutrality, can be set. In the council, comprehensive interviews were conducted with various industry groups, businesses, related ministries and agencies in a short period of time and on multiple occasions. The current situation, the reality, outlook, opinions/ requests to the government, etc. towards installation of renewable energy for 2030 were interviewed from each of their perspective, and discussions are underway based on the results of interviews.  Given the time left until 2030 and that each power source has its inherent technology development, deregulation, cost reduction, grid restrictions, etc., if the target for each renewable energy source is set with some range, the minimum target for installed capacity can be decided, which might as well cause incentives towards the target for maximum installed capacity and competition among power sources.

In the area of PV power generation, there are significant gaps among the targets and estimates for PV installation as of 2030 shown by different organizations, ranging from 92 GW to 222 GW, which greatly exceeds the current target for installation for 2030 of 64 GW set by the government. The past development of PV was driven by the synergies of installation expansion by dissemination measures such as subsidies and the FIT program, etc. and cost reduction, based on technology development of the PV system itself, which led to the creation of the market. However, toward the future, the degree of development may greatly vary depending on whether or not we can overcome the issues of PV power generation. There are four fundamental issues: 1) economic efficiency; 2) variability as the power source; 3) restrictions of location and 4) grid restrictions.  Among them, only the issue of economic efficiency has been tackled and improved up till today. PV has so far developed from a special power source (PV0.0), to an independent power source (PV1.0), then to a grid-connected power source (PV2.0). This growth was achieved with the support of the government which has shown the national target as an energy policy. As a result, today, PV installation of 70 GW (DC) level, which exceeds the target set by the government, has been achieved. As for future installation, it is possible to achieve an extension of today up to 100 GW scale with some level of technology and institutional measures. However, in order to achieve full-scale development of PV as the principal axis of main power sources exceeding 100 GW level, overcoming the issues of variability as the power source, restrictions of location and grid restrictions is an absolute requirement.

Considering the future development vision of PV in Japan, given the geographic conditions, nature conditions, land conditions, annual power consumption amount, etc., it is needless to say that improvement of performances of PV itself will be necessary, but establishing large-capacity power storage and securing large spaces will be the fundamental and major premise. As for the establishment of large-capacity power storage, storage batteries, hydrogen transition, etc., will be the key. As for securing large spaces, utilization of abandoned and active farmland will be the key. While these are the issues of technology development, regulations and legal improvement, industrial transition and harmonization with local communities are important. To surely achieve carbon neutrality by 2050, PV shall overcome the issues one by one and evolve itself into the next stage by each decade in the coming 30 years as shown in Figure 1. PV has a great development potential to play the central role to increase the renewable energy power source ratio to 50 to 60 %. 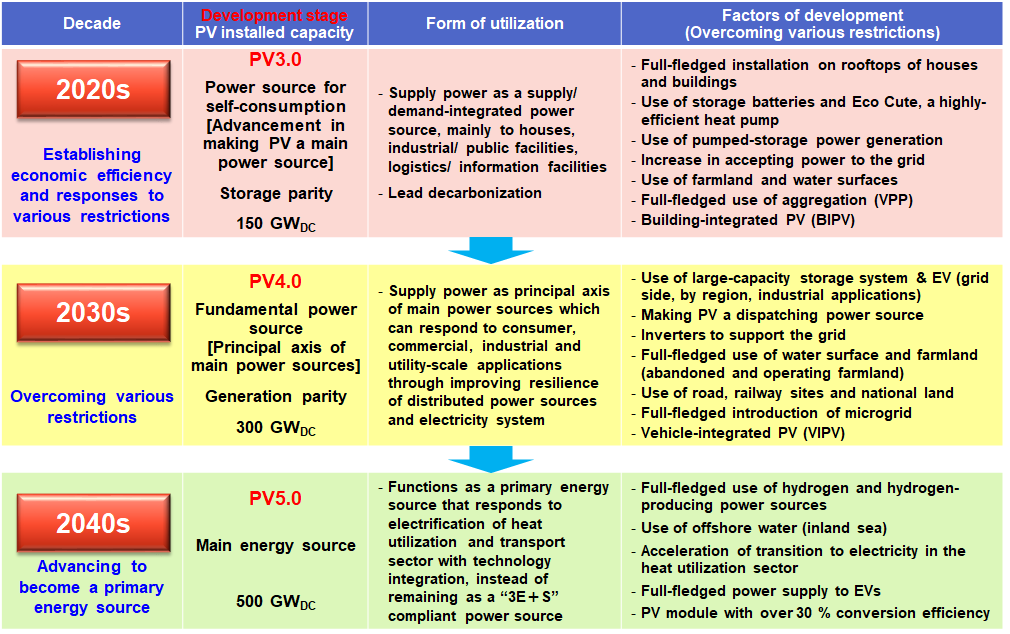 As for the future deployment in the 2020s, the economic efficiency that has been promoted will be further improved and PV as PV3.0 will step up to become a power source for self-consumption. The 2020s will be an important decade that will lead to the development in 2030 onwards, through acquiring trust and support from the nation by securing economic efficiency as a distributed power source and starting to overcome other issues. In the 2030s, all of the issues will be solved, and it will be a decade for PV to shift to the principal axis of main power sources as PV4.0. In the 2040s, PV will not only remain as the mainstream power source but also correspond to electrification of heat use and become the power source of the transportation sector by integration of technologies such as hydrogen utilization, and it will be a decade of challenge for operation as a primary energy as PV5.0. Upon setting the target for PV installed capacity, although there are external factors such as power storage and use of farmland, etc., the dramatic development potential as shown above should not be underestimated. The PV industry shall aim for early independence, and work on overcoming the issues through the partnerships among the industry, government and academia. It shall aim evolve itself in phases:  In the 2020s, it shall become an industry that leads others toward carbon neutrality; In the 2030s, it shall become an industry that deploys zero energy services; and in the 2040s, it shall become a basic social infrastructure industry.