Following the declarations by Prime Minister Yoshihide Suga on “2050 Carbon Neutrality” and “46 % greenhouse gas (GHG) reduction in FY 2030” (from FY 2013 level), concerned ministries and agencies, who had started working on realizing the targets, disclosed their policies one after another to contribute to the future dissemination of PV power generation, as shown in Figure 1. 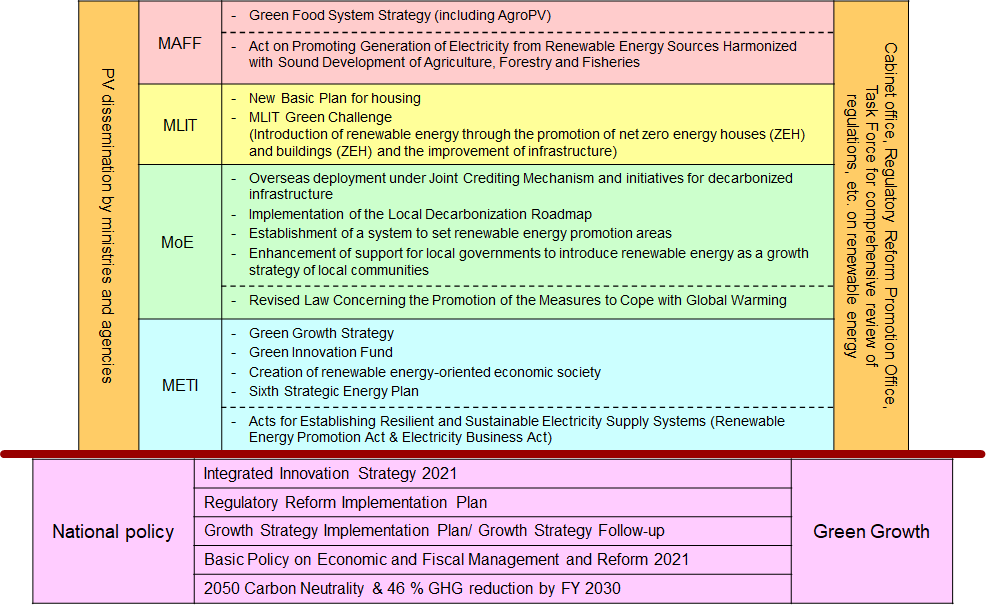 The Japanese government made a cabinet decision on the Basic Policy on Economic and Fiscal Management and Reform 2021, which is a basis for formulating the FY 2022 budget, and the Regulatory Reform Implementation Plan on June 18, 2021. In the Basic Policy on Economic and Fiscal Management and Reform, “Achieving a green society” is positioned as one of the four drivers of the growth. For “Achieving a green society”, there are three pillars as follows: 1) Inspiring private investment and innovation through the Green Growth Strategy; 2) Utilization of carbon pricing contributing to the growth and 3) Energy and resources policy toward decarbonization. As for energy policy, thoroughly making renewable energy a mainstream power source and maximum introduction of renewable energy with the principle of highest priority are included, based on the major premise of “3E+S”. The Regulatory Reform Implementation Plan takes up “Green (renewable energy, etc.)” as one of six areas of implementation. Activities by Task Force for comprehensive review of regulations, etc. on renewable energy, which was established at the Cabinet Office in November 2020, are reflected, and the regulatory reform contributing to the dissemination of PV power generation will be promoted through effective use of farmland, resolution of grid restrictions, expansion of options for consumers, as well as promotion of energy conservation of housing and buildings.

Among the policies and measures administered by concerned ministries and agencies as well, a policy to promote new developments over renewable energy was presented. As for the PV dissemination, a new form of PV utilization toward “decarbonization” is about to be added, aside from the conventional utilization of PV as power source. The Ministry of Economy, Trade and Industry (METI) has been promoting introduction expansion of renewable energy under its energy policy so far, and currently, it is speeding up formulating the sixth Strategic Energy Plan which covers acceleration of making renewable energy a mainstream power source and the upward revision of the target PV installed capacity, aiming toward 46 % GHG reduction in FY 2030. Furthermore, METI revised the Green Growth Strategy which was formulated in December 2020 focusing on the perspectives of industrial policy, and reorganized the industrial structure, positioning PV as the next-generation renewable energy source of the energy-related industries. The next-generation power management industry, the next-generation thermal energy industry and the material industry have been newly added.

Meanwhile, the Cabinet Office formulated the Local Decarbonization Roadmap at the Council for National and Local Decarbonization. This roadmap is also positioned as the growth strategy for local communities and expected to contribute to revitalizing local communities and solving the issues through the maximum introduction of renewable energy. The Ministry of the Environment (MoE) is responsible for executing this roadmap based on the Law Concerning the Promotion of the Measures to Cope with Global Warming, which was revised in May 2021. In partnership with other ministries and agencies, MoE is committed to creating a new scheme and a dissemination framework for the maximum introduction of renewable energy with the initiatives of local governments. In order to financially support local governments to promote decarbonization over multiple years by setting the areas to promote renewable energy, establishment of the “Grant for setting up renewable energy sites (tentative name)” seems to be planned. Over the next five years (“concentration period”), “leading areas of decarbonization” will be established in 100 locations across the nation, and focused measures will be implemented. The Ministry of Land, Infrastructure, Transport and Tourism (MLIT) compiled “MLIT Green Challenge”, planning to expand introduction of renewable energy through the promotion of net zero energy houses (ZEH) and buildings (ZEH) and the improvement of infrastructure, as a measure to achieve carbon neutrality via land development projects. The Ministry of Agriculture, Forestry and Fisheries (MAFF) formulated the Green Food System Strategy, based on which the ministry will promote demonstration and social implementation of PV systems on farmland (ArgoPV) as a way of utilizing renewable energy.

Since Japan’s energy mix is rapidly shifting from concentrated power generation to distributed one, the expansion of PV dissemination has entered the stage that requires support of policies and measures from concerned ministries and agencies from the perspectives of locations and installation formats. Aiming to achieve the 2050 Carbon Neutrality, concerned ministries and agencies must shift to promoting introduction of renewable energy systematically, aiming to achieve the common national target of introduction to be set in the Strategic Energy Plan, by estimating how much PV power generation can be introduced under their respective measures, instead of separately setting the target installed capacity.