Formation of the PV industry for over 100-GW introduction

On the other hand, the ratio of renewable energy was largely increased to 36 – 38 % (330 – 350 TWh of power generation amount) from 22 – 24 %, which is expected to accelerate the movement of making renewable energy a mainstream power source. The breakdown of five renewable energy sources is as follows: PV around 15 %, wind around 6 %, geothermal around 1 %, hydro around 10 % and biomass around 5 %.

As a policy response to increase the ratios renewable energy sources significantly, METI announced that it will promote the maximum introduction of renewable energy, while reducing the nation’s burden and encouraging the coexistence with local communities under the major premise of S+3E and the newly added principles of “consistent efforts for making renewable energy a mainstream power source” and “giving top priority to renewable energy.” METI’s policy response is based on the backgrounds as follows: 1) Japan must correspond to the global trend of decarbonization without delay; 2) METI has a cost outlook that PV power generation cost will get lower than the nuclear power generation cost and become the least expensive of all the power sources in Japan in 2030; and 3) PV excels in the lead time for introduction.

On the other hand, the PV industry has been expanding the businesses aiming to move on to “a new phase” to correspond to the Acts for Establishing Resilient and Sustainable Electricity Supply Systems. For the formulation of the new Strategic Energy Plan, which plans to significantly increase the renewable energy ratio, aiming at 46 % GHG reduction by 2030, the PV industry needs “a new dimensional” response as well.

Although the continuous expansion of PV introduction as a national strategy will be a driving force for the PV industry for its development in the future, there is a major premise that the PV industry bears the responsibility as a mainstream power source.

In this situation, where the related government ministries and agencies are united with the initiative of METI to form the dissemination measures for the formulation of the Sixth Strategic Energy Plan, the PV industry has to form an industry which is reliable as an energy industry from four aspects as described in Figure 1: 1) Formation of markets: the development of markets which corresponds to the environment of use and installation; 2) Formation of systems: the evolution of technologies, systems and operation formats which corresponds to various applications and patterns of use; 3) Formation of businesses: the establishment of business fields to surely proceed with making PV a mainstream power source and 4) Formation of players: participation from other industries. At the same time, the PV industry must establish the economic rationality with competitiveness as an industry and shift to independent business expansion with the future development potential, at a higher speed than ever.

Now, the responsibility which the PV industry bears is the core of the future energy policies of Japan. As an industry which leads decarbonization in conjunction with the national government, the PV industry shall be a light which will take us to a new era of energy. 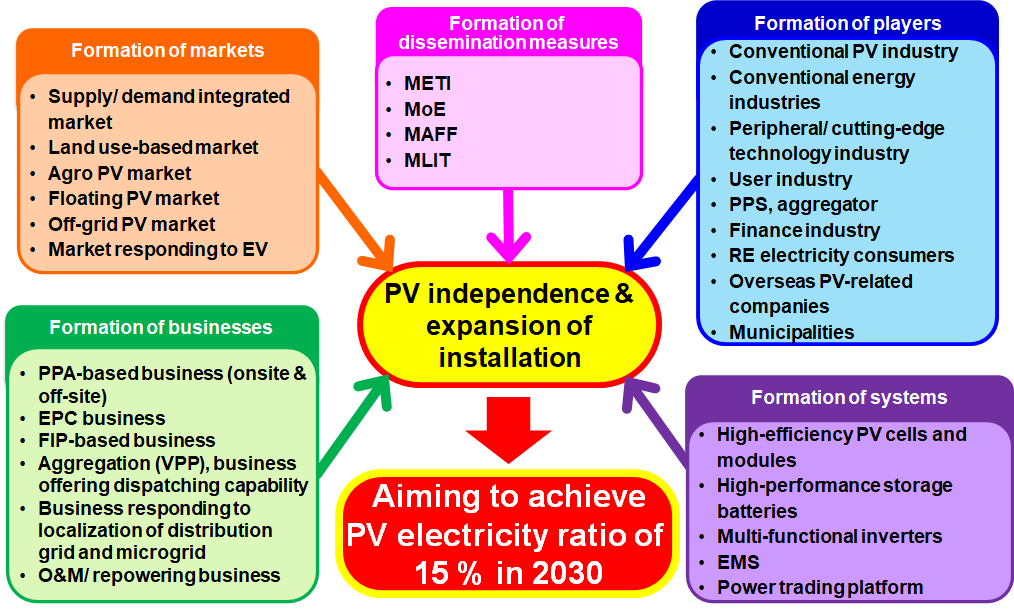