Eight pillars that will turn ambitious targets into reality

In Japan, where no delay is allowed toward creating a decarbonized society, the policy side, the supply side, the demand side and the finance side have all changed their responses to the renewable energy matters suddenly since the declarations of “carbon neutrality by 2050” and “46 % reduction of greenhouse gas emissions by 2030” by the determination of then Prime Minister Yoshihide Suga. However, with the cabinet approval of the drafts of the Sixth Strategic Energy Plan and the Plan for Global Warming Countermeasures, the targets for 2030 were set and then the situation settled down. From now on, the real tough challenges to achieve the targets will begin.

Although PV power generation has its own challenges to overcome, such as economic efficiency, variable power supply, grid restrictions, location restrictions and co-existence with local communities, it has been positioned as the main renewable energy source which should be developed the most among other power sources and an ambitious target of introducing 117.6 GW in FY 2030 was set. The capacity to be installed by 2030 will be some 60 GW, which is almost the same as the total installed capacity over the past decade, of which 18 GW of projects are approved for their project business plans but not yet in operation. Accordingly, around 40 GW will be the actual newly installed capacity.

There were concerns that the PV market would shrink due to the termination of the current FIT program which has been driving the PV dissemination, scheduled in March 2022 and the shift to the FIP program from April 2022. However, while the renewable energy task force started promoting the regulatory reform and formulating the Sixth Strategic Energy Plan and the Plan for Global Warming Countermeasures, the related ministries and agencies participated in this process and their share of responsibility for expanding the introduction of PV power generation became clear. The Ministry of Economy, Trade and Industry (METI) will not only keep the FIT program as it is for residential and small-scale PV systems as locally-utilized renewable sources and promote the introduction of medium- and larger-scale PV systems under the FIP program, but will also begin to expand the introduction with off-site corporate PPAs. In addition, METI will strengthen the improvement of the environment for dissemination to expand the introduction of renewable energy toward the promotion of regional understanding and the solution of grid restrictions. The Ministry of the Environment (MoE) will promote the followings: 1) the national and local governments’ initiative in implementing the introduction of PV power generation in public buildings; 2) the introduction of PV systems in harmony with local communities led by local governments through positive zoning; 3) the support for private companies to introduce PV systems for self-consumption and 4) the creation of areas leading in decarbonization based on the regional decarbonization roadmap. The Ministry of Land, Infrastructure, Transport and Tourism (MLIT) will promote ZEH and ZEB by strengthening regulations to ensure compliance with energy conservation standards for homes and buildings as well as the introduction of PV systems using the spaces of infrastructure facilities under its jurisdiction, such as roads, railroads, airports, urban parks, etc. The Ministry of Agriculture, Forestry and Fisheries (MAFF) will review the regulations on the conversion of agricultural land for the installation of PV systems and expand the introduction of PV systems on farmland based on the Green Food System Strategy.

For the introduction of PV toward 2030, the framework of sharing responsibility by four ministries (METI, MoE, MLIT and MAFF) with METI at the core has been established in this way and it will become possible to install PV systems in the fields, regions and locations where PV introduction had not made much progress so far. By mobilizing all the laws, systems, measures, regulatory reforms and budgets under the jurisdiction of each of the concerned ministries and agencies, a new driving force for the dissemination of PV is about to be created and the structure for dissemination will change from the 2010s-style, which solely depended on the FIT program, to the 2020s-style. The dissemination of PV power generation in the future will be a project which requires inter-ministerial cooperation, so coordination and continuity will be more important than ever before.

In addition to this deployment for the introduction by the responsible ministries and agencies, eight pillars are needed to achieve the target PV installed capacity in the future, as shown in Figure 1. Local governments, the PV industry, the user industries (industries which utilize PV power generation), the market, electricity consumers, power grids and finance will each generate a driving force and, by combining their shares of responsibilities, the ambitious national goals can be turned into reality. Japan’s PV industry has installed 50 GW-scale of PV systems over the past decade and completed more than two million installations of various sizes, applications and locations. Furthermore, the industry earned the experience of long and stable management of generated electricity. The experience, technique and knowledge gained under the FIT program are the launching pad for the next decade and must be used to achieve the next goals and to develop toward the independence of PV power generation. Fortunately, in the 2020s, a group of electricity consumers who want renewable energy sourced electricity is growing up and the composition is made in which the financial industry is ready to support the consumer group. The PPA models that do not require installation costs are about to spread. Local governments are also starting the deployment for the introduction to revitalize their local economies. The measures to solve grid restrictions will also be promoted, such as the reinforcement of power grids, the expansion of non-firm connection and the securement of adjustment power sources using power storage. In response to these new changes in the business environment, the PV industry must become a keystone for the accomplishment of the national goal to introduce additional 60 GW, since the PV industry is responsible for the stable supply. For this purpose, the PV industry needs to sophisticate and improve functions of PV systems, to reduce costs of PV systems including storage batteries and secure stable supply, to develop the market in cooperation with responsible ministries and agencies and to strengthen the cooperation with surrounding industries such as the industries of storage batteries and IT. 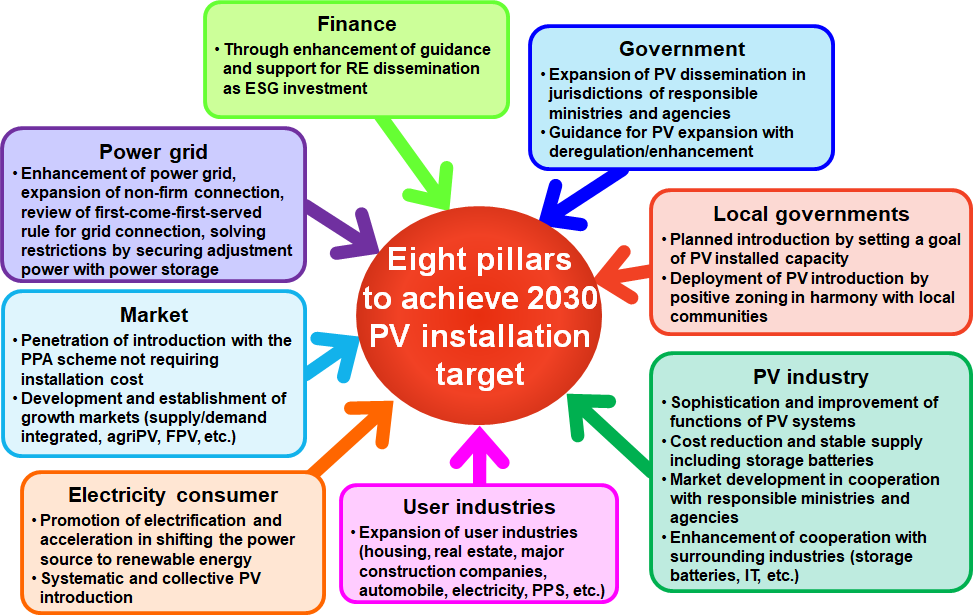