Downloads
HOME > Monthly Perspective > The government and responsible ministries should form a scram to achieve the PV target in 2030, shifting the “aggressive goal” to the “realistic goal”

The government and responsible ministries should form a scram to achieve the PV target in 2030, shifting the “aggressive goal” to the “realistic goal”

Under the new cabinet of Prime Minister Fumio Kishida, the “Sixth Strategic Energy Plan” and the “Plan for Global Warming Countermeasures” were approved at its cabinet meeting and relevant ministries and agencies are seen to intensify their efforts to develop policy measures for achieving the target of the year 2030.

Regarding the mass introduction of renewable energies and establishment of the next generation network, the Ministry of Economy, Trade and Industry (METI) announced the fourth interim report from the perspectives of the evolution of competitive renewable energy industry, the creation of the renewable energy society in harmony with local communities and the establishment of social infrastructure in support of renewable energies such as networks, and finished the discussion in the fourth phase. As the next fifth phase discussion, METI is going into action for achieving the ratio 36 % to 38 % of renewable energy set in the new energy mix under the Sixth Strategic Energy Plan. The Ministry of the Environment (MoE) started a discussion to set the promotional areas where renewable energy will be introduced by local governments based on the revised Law Concerning the Promotion of the Measures to Cope with Global Warming (positive zoning). The Ministry of Land, Infrastructure, Transport and Tourism (MLIT) also started a discussion on energy conservation of houses and buildings as well as the building standard system.

Out of the renewable energy power supply ratio 36 % to 38 % prescribed in the Sixth Strategic Energy Plan, PV accounts for 14 % to 16 %. In terms of the target PV installed capacity, it was made possible to set the introduction expansion target of over 100 GW by adding MoE, MLIT and the Ministry of Agriculture, Forestry and Fisheries (MAFF) to METI as the ministries responsible for the introduction and expansion of PV power generation, and, as a result, an ambitious target of 117.6 GW was set. The breakdown of this 117.6 GW target is as follows: 61.8 GW [18 GW with FIT projects which have not started operation, 13.8 GW with continuous policy efforts (1.5GW annually), 6 GW with public sector initiatives, 8.2 GW with the installations in harmony with local communities, 2.3 GW with renewable energy bases at airports, 3.5 GW with the enhancement of policy measures for newly built houses and 10 GW with promotion for self-consumption by private companies], on top of 55.8 GW of installed capacity as of the end of March 2020. The 61.8 GW of the expected new installations consist of the capacity identified for specific markets and the one only within a broad framework are mixed. Accordingly, the markets where PV should be introduced must be clarified hereafter to surely promote of the PV introduction. Furthermore, the introduction of other renewable energy sources is expected to increase as well, thus the PV power generation must be disseminated and expanded in line with the electric power storage eventually.

“One plus three framework” of responsible ministries with METI as a main player that was newly formed by the engagement of three ministries was established through the formulation of the Sixth Strategic Energy Plan. This framework will become indispensable as it can show that the nation intends to expand the PV introduction and improve the foreseeability and effectiveness of over 100 GW PV introduction. The framework also makes it possible to put together and use the laws, systems, policy measures, regulatory reforms and budgets and pave the way for the expansion of introduction in the fields and areas where PV power generation has not been introduced so far. The enhancement of continuous collaboration of the four ministries regarding the introduction will be important in the future.

To achieve the ambitious goal of 117.6 GW in 2030, the actions by consumers of electrical power such as an industries and homes including the PV and related industries, local governments, financial institutions in addition to the full use of the government’s policies are vital. The responsibilities are required to be borne not only by the related ministries but also by both sides with the government as a main player. If the nation with the collaboration of the responsible ministries for achieving the target shown in Figure 1 can create “power for dissemination” stronger than the FIT program and evolve it into a national movement for the dissemination, the ambitious target of the year 2030 will come to a realistic target. The PV industry, in particular, must strengthen the industrial infrastructure through the formation of markets, businesses, players and systems and work more closely with the “responsible ministries” for the PV dissemination and expansion. The PV industry should aim for establishing an industry that can provide a stable power supply of 150 TWh/year by 2030 by spreading the business fields not only for the new introduction of PV systems but also for the maintenance and management of operational PV systems as well as the supply of PV electricity in collaboration with the power storage sector.

Globally, COP26 that aims for achieving Paris Agreement toward decarbonized society is held in Glasgow, the UK (at the time of writing). In Japan, Prime Minister Kishida’s new cabinet is planning to formulate a new “Clean Energy Strategy” subsequently to the “Green Growth Strategy” of the previous cabinet. Regarding PV power generation, making the best of the characteristics as a renewable energy source, among other renewable energy sources, which electricity consumers themselves can take in, it is thus expected that the government will formulate a strategy which shows a concrete path for achieving the PV target for 2030. No delay shall be accepted for the momentous decade from now on. 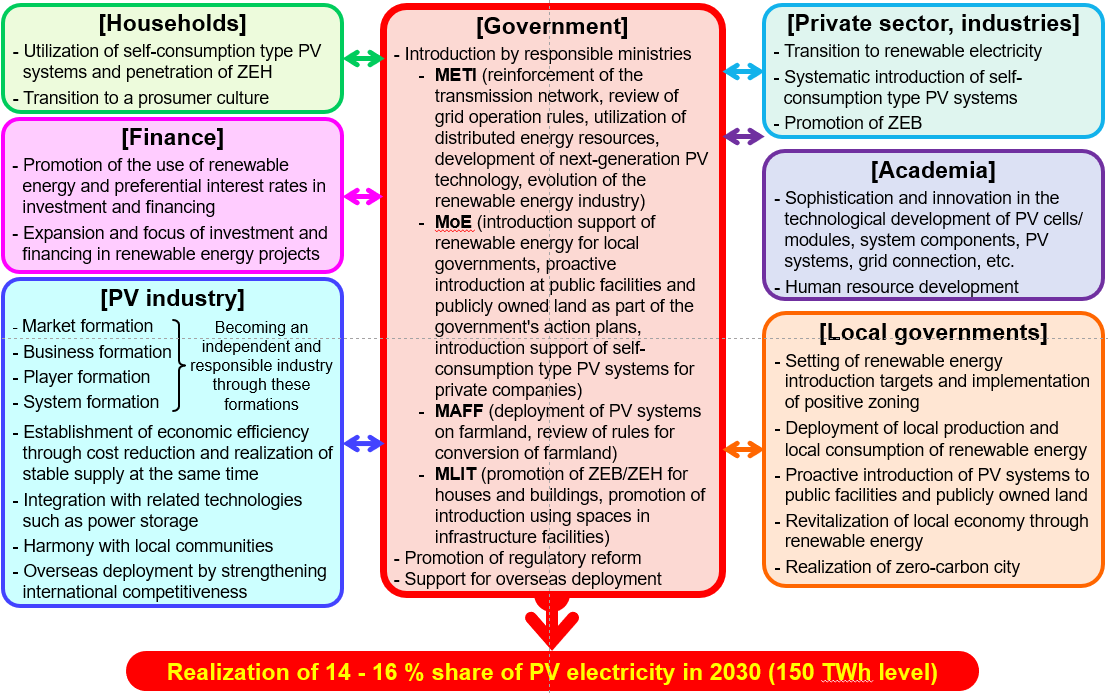