The beginning of PV deployment led by local governments

Following the enactment of the revised Law Concerning the Promotion of the Measures to Cope with Global Warming and the formulation of the Local Decarbonization Roadmap, local governments have started actively working on local decarbonization toward FY 2030 as shown in Table 1. Among the efforts, prefectural and municipal governments have secured the FY 2022 budget for the introduction of renewable energy. While ordinances have been established to restrict the introduction of renewable energy in light of local circumstances such as the preservation of the natural environment and landscape, new introduction and expansion of renewable energy is expected with the initiative of local governments based on the premise of maintaining harmony with local communities. In particular, PV power generation has been mainly introduced by municipalities, the private sector and individuals as single owners. Hereafter, however, it will be possible to promote collective or coordinated and comprehensive introduction of PV power generation on a regional basis in a well-planned manner.

In the formulation of the Sixth Strategic Energy Plan, the Ministry of the Environment (MoE), as one of the ministries responsible for the renewable energy introduction, announced the target PV installed capacity of 24.2 GW: 6 GW for the Public Sector Initiatives to install PV power generation in 50% of the buildings, etc. owned by the national and local governments; 8.2 GW for the promotion of zoning and PV Systems in Harmony with Local Communities; and 10 GW for the installation of self-consumption type PV power generation by private companies. MoE’s announcement of the target installed capacity has made a significant contribution, as it encourages local governments to introduce PV power generation. In addition, MoE has established a project to create leading areas of decarbonization in more than 100 locations and a subsidy for the promotion of renewable energy to spur the expansion of introduction led by local governments. By establishing classifications for leading areas of decarbonization (residential areas, business/commercial areas, natural areas and facility clusters), MoE aims to create a pattern of installation in typical Japanese installation areas and expand it nationwide. As 102 municipalities representing 79 regions have already applied to the first round of the public offering, an increasing number of municipalities are taking positive approaches to forming local decarbonized societies and revitalizing local economies by the introduction of renewable energy.

Local governments are expected to promote the introduction of PV systems in public facilities such as schools and government buildings, as well as in houses, private facilities and farmland. For the PV industry, this will be an important growth market to develop the PV market for self-consumption. Taking this new trend by local governments as a great opportunity, the PV industry should solidify the cooperation rooted in the communities with local governments that are working to expand introduction of renewable energy and enhance its local deployment, including the support for local renewable energy-related business operators and the proposals of business models such as PPAs which enable PV installation with no initial cost. 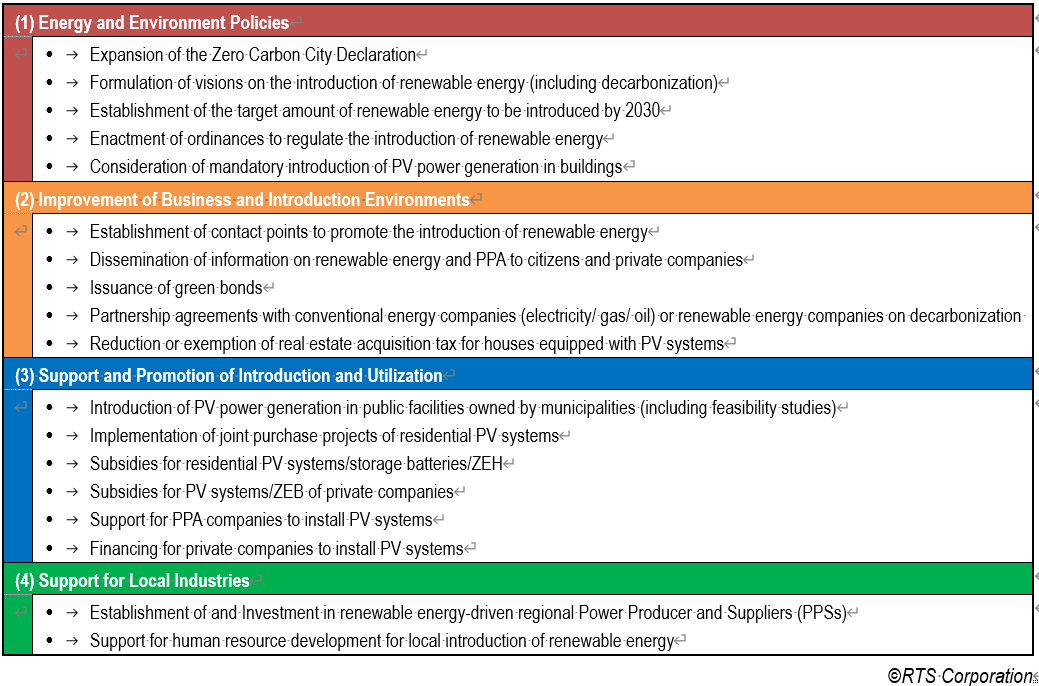