The Ministry of Economy, Trade and Industry (METI) and the Ministry of the Environment (MoE) have released their budget requests on renewable energy related items for FY 2020 (April 2019 to March 2020), respectively, toward achieving the common target of making renewable energy a mainstream power source. Following the expanding dissemination of renewable energy, the two ministries are complementing with each other in the areas of technology development, installation support, safety, support for communities and small- and medium-sized enterprises (SMEs), finance, CO2 reduction, as well as support for developing countries, and they are trying to secure the budget as per their requests.

Furthermore, METI made the third interim report of the Subcommittee for Large-volume Introduction of Renewable Energy and Next Generation Electricity Network and an interim report of the Subcommittee on resilience of electricity toward achieving a decarbonized society, aiming to drastically revise the Feed-in Tariff (FIT) program. Toward the 2020s, the Fifth Strategic Energy Plan of Japan will shift its focus from the pursuit of quantity in the 2010s to the pursuit of quality as an energy source, which is expected to accelerate making renewable energy a mainstream power source.

In the early 2020s, the following developments are expected: 1) construction of large-scale PV power plants which had not started operation; 2) creation of supply/ demand-integrated PV market which will be promoted by METI; 3) growth of new PV markets such as solar sharing and floating PV; 4) market growth of PV systems as off-grid power sources including microgrid power sources generated by the accomplishments of technology development. As a result, the use of PV power generation is expected to enter the phase of diversified applications, by responding to the needs and requests from the demand side including power generation scale, utilization forms and areas, market, value standards, etc., as shown in Figure 1. The backgrounds here are expansion of PV utilization areas and applications through policy measures, schemes and regulatory reforms by governmental ministries and agencies, as well as improvement of functions and performances of PV cells/ modules and systems through technology development, which will lead to widening of PV utilization areas. Furthermore, electricity storage has been added to power generation functions with PV, together with coupling with advanced technologies (IT, AI, IoT, robots, drones, etc.), new PV applications which had not been possible before solely by PV (including management) will become possible, equivalent to the applications with conventional energy sources. Under such circumstances, the financial industry and users (individual and industrial electricity consumers), who place emphasis on economic rationality and environmental considerations, will make consistent efforts, which will strongly contribute to expanding PV installations.

In Japan, PV installations have been driven jointly by METI and the PV industry from the perspectives of policy measures and supply, like the wheels of a vehicle. However, in the stage like now where PV has realized economic efficiency equivalent to that of conventional energy sources and entered the stage of diversified applications, it is possible for PV power generation to improve flexibility of energy supply and demand structure and resilience in local communities, added with the mobility as a distributed power source. Japan is now facing the opportunities of shifting to a new and strong dissemination framework to make PV a mainstream power source, by not only enhancing these wheels but also by adding the financial industry and the users. The front wheels are the joint activities of the PV industry and the users as a new driving force for dissemination, whereas the rear wheels are the structure supported by the national government and the financial industry, which will make PV more stable and the applications will expand, just like a four-wheel drive vehicle.

As of the end of March 2019, 1.9 million PV systems with a total capacity of 45 GW are operating in Japan under the FIT Act. Japan has the experiences of PV installations of various scales, applications, locations, and construction methods. Furthermore, the new markets such as solar sharing and floating PV markets are emerging. While the ratio of PV system components (PV modules, inverters, etc.) procured from overseas increases, it is expected that the PV development can be increased by shifting the focus from manufacturing to utilization and operation. By looking at the comping of an era of diversification of PV applications as significant opportunities, Japan should make PV a genuine mainstream power source ahead of other countries, with the PV development driven by four wheels as the driving force for the 2020s. 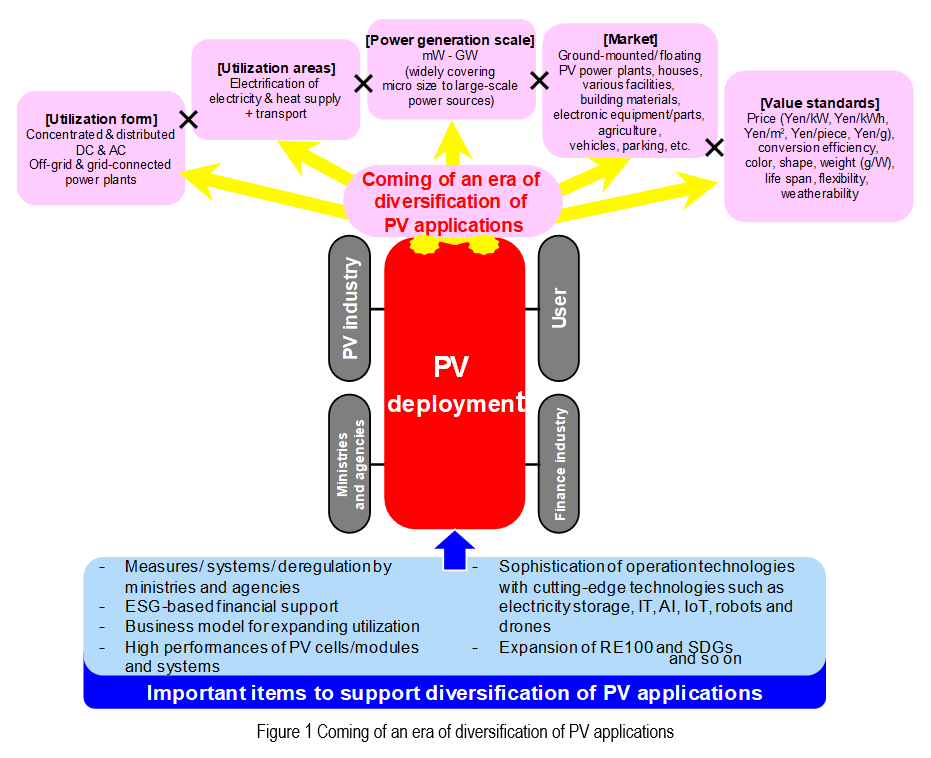