The Ministry of Economy, Trade and Industry (METI) indicated the new policy and direction through councils, and movement towards drastic revision of the FIT Act and reestablishment of the renewable energy policy are steadily progressing. Especially, PV will transfer from dissemination expansion that is dependent on the FIT program in the 2010s and aim for independence and to make a debut in the power market as a mainstream power source that will become the main axis in the 2020s.

METI will broadly classify renewable energy into “competitive power source” and “locally-used power source” in establishing a program corresponding to the characteristics of renewable energy as power source, and plans to introduce a new system. As for PV generation, large-scale PV for utility applications will be placed as competitive power source and achieve integration with the power market, aiming for cost reduction to the same level as the international price through tender. Residential PV and small-scale PV for commercial applications will aim for establishment of the market in which supply and demand that are integrated (supply/ demand integrated market) based on self-consumption and local production and local consumption under the framework of the FIT program with PV as a locally-used power source for the time being.

In the early 2020s, the measures for the start of operation of large MW-scale PV projects which have not started operation based on the current FIT Act, remain. However, as a result of drastic revision of the FIT program, installation on rooftops of buildings and nearby areas with power demand such as housing and industrial facilities, will be induced. In addition, “supply/ demand integrated” market that can correspond to local resilience as well, will develop as a central market. Out of the objective shown in Article 1 of the current FIT Act, “revitalization of local communities” and “healthy development of national economy” that have not progressed will finally start functioning.

As for overseas, expansion of MW-scale PV market is expected to continue in the future following the increase of power demand in mainly developing countries. However, in Japan, establishment of distributed power source market for self-consumption and local production and local consumption, will progress leading the world, with the deployment of dissemination measures for supply/ demand integrated market with PV as a distributed power source. Highly profitable business environment based on acquisition of less expensive and large-scale land and power sales in the 2010s will come to an end, and a business environment will greatly shift to the one based on self-consumption and surplus power sales. Accordingly, power consumers consisting of general industries, municipalities and households will become PV installers on their own and start to adopt the third party ownership (TPO) model. As a result, the rooftop PV market in facilities/ buildings with power demand that had not been much developed in the 2010s will develop in earnest, and create a business opportunity as a growing market of the 2020s along with the power system reform. The PV business will change from the conventional simple business model of selling all generated electricity to electric utilities to the one requiring cost reduction ability and expertise, and business management strategy based on experience and technology development capabilities of PV generation will be tested.

Meanwhile, as for MW-scale PV projects, there is little suitable land and the market is limited since the first priority is the economic efficiency. New installations of PV power plants are estimated in locations where less land development cost and grid interconnection cost are needed, for replacing conventional power plants, or for achieving RE 100, etc. Furthermore, growth is expected in new markets that developed in the latter half of the 2010s such as floating PV system and agro PV (solar sharing, or PV system installation on farmland while continuing agricultural activities), etc. by gaining experiences through deregulation and installation support of related ministries and agencies. In addition, independent power source market, vehicle integrated PV (VIPV) market, and building integrated PV (BIPV) market are also expected to grow from 2025 onwards through the progress of technology development which will expand the application areas. The PV applications in the 2020s will expand in various fields and is expected to spread in the society as shown in Figure 1.. 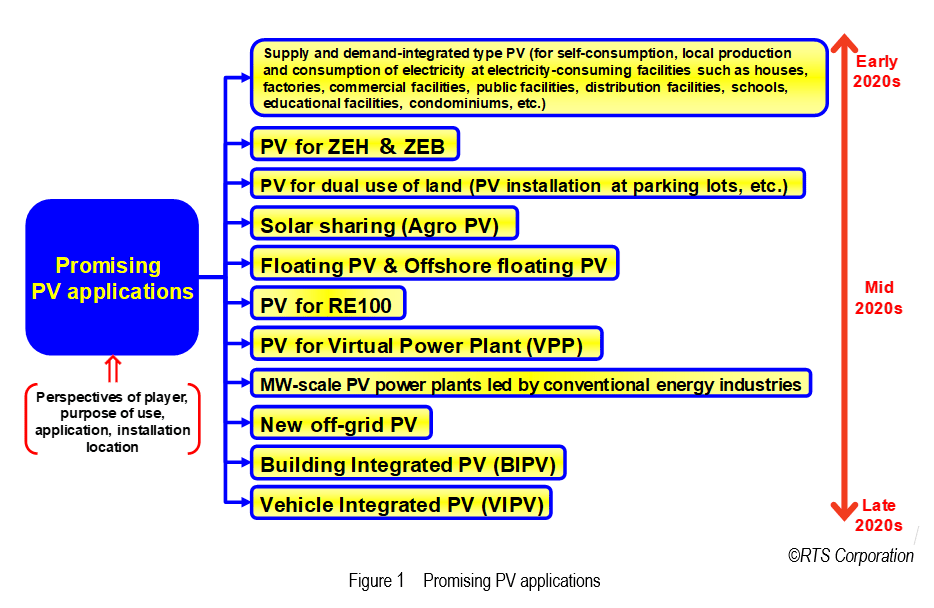 The cumulative PV installed capacity until the end of 2010s is estimated to exceed 60 GW (DC based). As mentioned above, new PV installation is necessary while long-term stable maintenance of PV systems that are currently operating is also an important field for the PV business in the 2020s. As for the PV industry, development has progressed based on flow (new installation). However, an era has arrived for development of the PV industry to progress based on stock (start of operation capacity) as well. The PV industry based on stock also offers a new business opportunity for O&M business, intermediating power plant trading, aggregation business, recycling business, etc. This field will be an important foundation business that will support the long-term stable PV generation as a growing market of the 2020s.

In the 2010s, the business environment has been supported by the FIT program. However, in the 2020s, business development in the competitive market, such as integration with the electricity market, is necessary to be cultivated while receiving some government support. Fortunately, users seeking for PV power generation such as ESG investment and the RE100 initiative, have grown greatly in Japan. The PV industry will be able to change the coming 10 years to a bright decade that will establish the foundation for the beginning of a PV society along with users by enhancing thorough pursuit of dissemination expansion ability including economic efficiency.