The state of emergency due to the expansion of the COVID-19 was completely lifted after about 50 days of implementation. During this period, the economic activities of Japan were forced to be almost completely halted. The infectious disease threw cold water on the PV industry as well, right before the PV industry entered the new stage with the drastic revision of the FIT Act, etc. However, the PV industry overcame multiple crises under difficult situations in the past, and continues its activities while new activities are reported as well.

As for the market, movements for cultivation of new market areas towards the future have been reported, such as new installation of road-integrated PV system that illuminates during the night time at Tokyo Big Sight by Solar Frontier, etc. as well as installation of PV systems at station platform and station building at Takanawa Gateway Station, a new JR station, by AGC. Resol Group started operation of a PV system for local production and local consumption that combines self-wheeling and own electric lines in an integrated resort in Nagara Town of Chiba Prefecture.

As for the electricity industry, it was announced that the amount of PV power generation covered 88 % of the electricity demand in the morning of May 5, 2020 (national holiday) in the service area of Shikoku Electric. Furthermore, in the conventional energy industry, JXTG Holdings announced to expand its renewable energy generation capacity to more than 1 GW in its second mid-term management plan until FY 2022 as well as invest 400 billion Yen ($ 3.72 billion) to next generation energy sources including hydrogen. As for local governments, Tokyo Metropolitan Government (TMG) will start a business to purchase electricity generated by post-FIT residential PV systems at a preferential price (addition of 1.5 Yen/kWh (1.39 cents/kWh)) and utilize the electricity in facilities owned by TMG.

In response to these movements of PV and renewable energy, the Ministry of Economy, Trade and Industry (METI) held a meeting of the Council for Overseas Infrastructure Development and created an interim report on how to promote export of infrastructure systems hereafter. In the interim report, expansion of the renewable energy market is clearly stated and the importance of Japan’s contribution to renewable energy-based power generation is proposed, while emphasis is made on the necessity of providing various solutions to accelerate energy transition and decarbonization, since the era to acquire overseas infrastructure market with only the superiority of equipment manufactured in Japan is coming to an end.

Furthermore, the review of the energy mix will start towards formulation of the 6th Strategic Energy Plan. Although Japan’s economy is forced to stagnate by the impacts of the COVID-19, PV power generation is advancing step by step.

From now on, it is assumed that Japan will move towards resuming the economic activities with the complete lift of the state of emergency and the energy demand that largely decreased will rapidly recover along with the economic revitalization just like we experienced after Lehman shock in 2008. The Japanese government is preparing large-scale economic stimulus measures to address this unprecedented economic crisis, while there are movements in other countries to set the climate change measures and digital transformation as the pillars of economic measures. Triggered by the COVID-19 pandemic, Japan should also include dissemination of renewable energy in one of the pillars of economic measures corresponding to energy and environmental policies. We must avoid looking back at the year 2020 ten years later, as the year of the greatest opportunity to accelerate dissemination of renewable energy.

The diversification and advancement of generation scale, market, value standard, utilization format, utilization area of PV will progress through technological development in the future. As shown in Figure 1, PV will play the role in various situations and integrate with the society as the most familiar energy.

The PV industry should adopt new business models and cutting-edge/ related technologies based on knowledge and technology cultivated in the past and make full efforts for the expansion of self-consumption type PV market that does not depend on the next generation electricity network. We should start to move, aiming for a great upward revision of the PV installation target in the next-term energy mix through improving economic efficiency in partnership with electricity consumers. 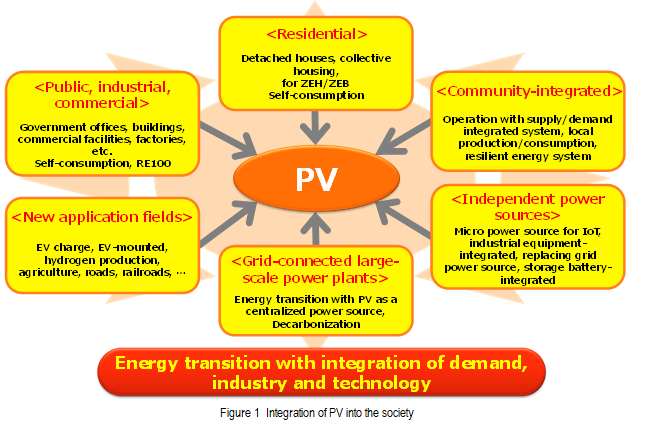