The bill of the Acts for Establishing Resilient and Sustainable Electricity Supply Systems including the revision of the Feed-in Tariffs (FIT) Act was approved and enacted in the plenary session of the House of Councilors on June 5, 2020. The act is scheduled to be enforced in April 2022. In this bill of Acts, the FIT Act will be drastically revised towards market integration, and the dissemination of renewable energy in Japan will shift from full dependence on the FIT program to a new stage aiming to make renewable energy a mainstream power source. Especially PV, which ranges in both fields of competitive power sources and locally-used power sources will further deepen its central role to make renewable energy a mainstream power source.

With the establishment of the bill of the Acts for Establishing Resilient and Sustainable Electricity Supply System, the Ministry of Economy, Trade and Industry (METI) will start to design a new scheme. Specifically, the following will be promoted under the new FIT Act: 1) Promote utilization of electricity from renewable energy; 2) Support introduction linked with the market; 3) Grid maintenance that takes advantage of the potential of renewable energy; 4) Appropriate disposal of renewable energy facilities. Under the new Electricity Business Act, the following will be promoted: 1) Enhance cooperation in the event of disasters; 2) Improve resilience of power transmission and distribution networks, and 3) Maintenance of disaster-resistant distributed power systems.

Recently, there are opinions that investment in renewable energy towards decarbonization will not progress due to the stagnation of economy following the global expansion of the COVID-19 infection. Meanwhile, there are other opinions that dissemination will progress by putting decarbonization into the economic revitalization measures. In mainly Europe, the “Green Recovery Plan” to strategically accelerate green investment of energy as an economic revitalization measure aiming for realizing a decarbonized society is progressing. Fortunately, discussions on green investment may start in Japan as well, as an economic stimulus measure.

In the formulation procedures of the 6th Strategic Energy Plan, not only the vision for 2030 but also the visions for 2040 and 2050 are expected to be discussed. We should launch a national energy strategy of establishing a “renewable energy-oriented country” as shown in Figure 1, considering the future vision of renewable energy based on the global trend for expansion of installation of renewable energy, evolution as an energy source through technology innovation and integration, and market formation focusing on electricity consumers. The competition over supremacy for the establishment of a renewable energy society are about to start globally, and Japan should not fall behind even slightly in the competition, to secure the source of national interest.

Japan should consider the aim of establishing a “renewable energy-oriented country” as an opportunity since it is a field where Japan can take advantage of its superiority as a pioneer since the utilization of renewable energy is led by national schemes and solutions technologies unlike PV cell/module manufacturing, which is based on simple technologies. To achieve this, it is necessary for the Japanese government to make one step further in the formulation of the next Strategic Energy Plan from making renewable energy a mainstream power source to presenting to the citizens the aim of making Japan a renewable energy-oriented country from this point on. We must avoid looking back in the 2030s to regret that the time of formulation of the 6th Strategic Energy Plan was the greatest opportunity.

PV power generation, which has reached the level similar to conventional energy sources over the years of technology innovation, has overcome many obstacles that had been said to be impossible to overcome. PV has the potential of significant growth as an ideal energy source through its own evolution as well as supplementing and integration with other technologies to tackle the issues that cannot be solved with only PV. Rather, it is not too much to say that the growth of PV to release its full potential will start.

Therefore, the establishment of “renewable energy-oriented country” shall be set as a new goal in addition to “3E+S”, the basic guidelines that are important for energy in Japan upon formulating the 6th Strategic Energy Plan. We wish the see the challenge to formulate a push-type Strategic Energy Plan with significant evolution and can correspond to industrial policies, revitalization measures for regional economies, overseas infrastructure export policies, etc. based on the new goal. It is important to establish the new Strategic Energy Plan that has the perspectives to motivate willingness to invest for creating a far-sighted and bright future society from both the supply side and the demand side, rather than simply making a brush up of the 5th Strategic Energy Plan. 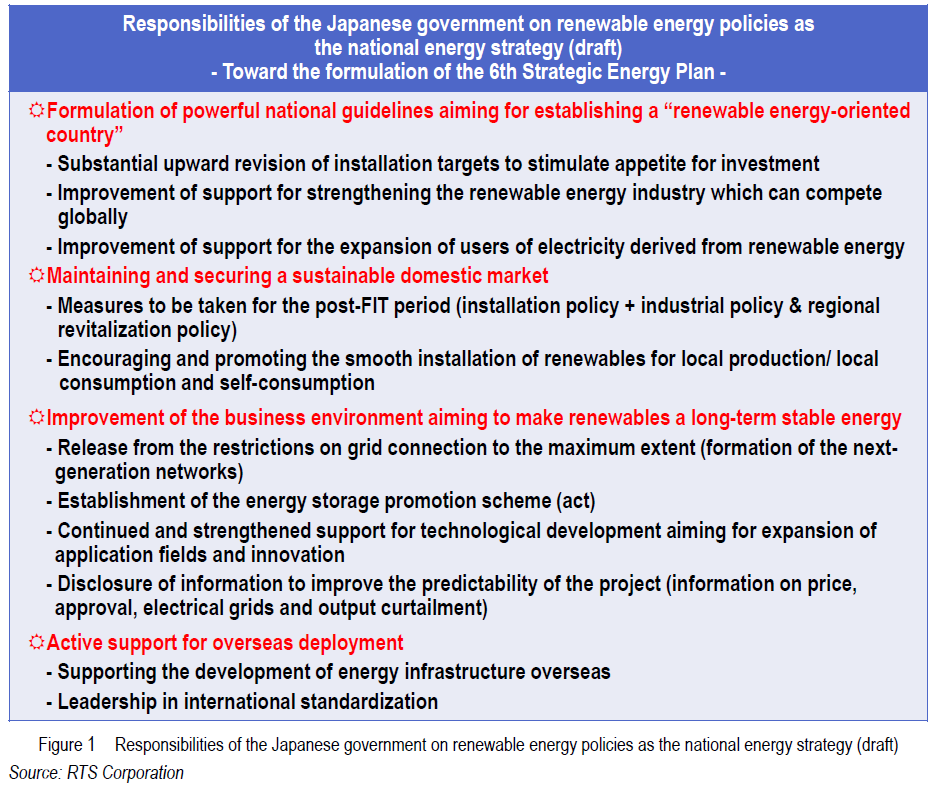