Japan’s energy policy will start to undergo a major revision with the Plan for creating renewable energy-oriented economy, which was set forth by Mr. Hiroshi Kajiyama, Minister of Economy, Trade and Industry, in addition to the enactment of the Acts for Establishing Resilient and Sustainable Electricity Supply Systems, looking to the future. Specifically, as for renewable energy, whose future potential is highly evaluated, Japan will largely shift its direction to make renewable energy a mainstream power source at an early stage.

The Ministry of Economy, Trade and Industry (METI) held a joint meeting of the Study group on the basic concept of Environmental Impact Assessments (EIA) related to PV power generation facilities, etc. and the Subcommittee on System Reform for Renewable Energy as Main Power Source to design new details on renewable energy based on the Acts for Establishing Resilient and Sustainable Electricity Supply Systems and announced the basic principle, entitled Towards creating renewable energy-oriented economic society, for discussing the fourth phase of dissemination and expansion of renewable energy. These subcommittees have been working on expansion of introduction of renewable energy and addressing the issues. The report for the third phase made by the Subcommittees is leading drastic revision of the current FIT Act and driving a reform of the FIT Act into the new Renewable Energy Promotion Act.

Toward creating a renewable energy-oriented economic society as mentioned above, it is essential for the industry to have a strong commitment to actually expand renewable energy as a business. PV, along with hydro and wind, is an important renewable energy source for Japan to become a renewable energy-oriented country. The industrial sectors supporting the PV industry can be broadly classified into the one suppling PV power and the one utilizing PV power. The former sector, which once was the world’s largest, is now under a severe global competition, whereas the latter sector, which is a new industrial sector which is expected to grow significantly hereafter. Activities toward making PV power generation a mainstream power source are just starting in full scale and the formation of the industry through integration of both the supplier and the user industries will be the linchpin. Taking the 2020s as a great opportunity, the PV industry consisting of these two sectors should aim to become a key industry through partnership between the industry and the government, and is expected to promote business development as shown in Figure 1 and Figure 2. Japan should once again lead the world as a country of renewable energy-oriented economic society. 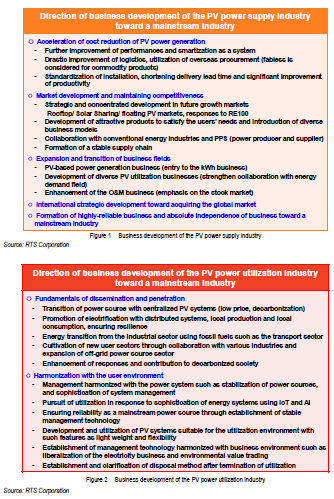