Japan’s energy policy greatly changed its direction towards the “creation of a renewable energy-oriented economic society”, aiming to making renewable energy a mainstream power source from an early date. The Ministry of Economy, Trade and Industry (METI) started preparations for the formulation of the Sixth Strategic Energy Plan and design of a new scheme with the following as the pillars: 1) evolution toward realizing the competitive renewable energy industry; 2) maintenance of social infrastructure such as network, etc. that support renewable energy and 3) establishment of communities in harmony with renewable energy, based on the Acts for Establishing Resilient and Sustainable Electricity Supply Systems, aiming for a full-scale development of renewable energy. The future dissemination of PV power generation is shifting from the expansion of MW-scale PV power generation based on power sales as a competitive power source to the creation of the market in which supply and demand are integrated (supply/ demand integrated market), as well as the market for local production and local consumption of electricity as a locally-utilized power source. The role of municipalities will be extremely important for the expansion of dissemination in this field since it requires measures responding to the local characteristics.

Furthermore, the involvement of municipalities is necessary for progressing the above mentioned 1) and 3). Since the start of the Feed-in Tariff (FIT) program, the mechanism of PV dissemination based on gross power sales was established by mainly the “national government”, “PV industry” and “finance”, however, now that the economic efficiency of PV has improved, the path is open for expansion of dissemination rooting in local communities based on self-consumption with PV as a locally-utilized distributed power source. Therefore, municipalities can play the role of revitalizing the regional economy and guaranteeing safety and security of local residents, while enabling the expansion of dissemination led by municipalities through installation of distributed renewable energy and utilization of renewable energy-based electricity (RE electricity).

Municipalities have so far promoted dissemination of renewable energy in a passive manner with support from the Cabinet Office, ministries and agencies based on national policies. However, from now on, municipalities will be able to promote local production and local consumption of RE electricity with local industries and residents in an active manner. Utilization of renewable energy need to be progressed responding to local characteristics while classifying renewable energy power sources into competitive power source and locally-utilized power source responding to their characteristics. To achieve this, it is important for each municipality to take the central role in promoting installations according to the status quo of each area. Especially, PV can be introduced in any area of Japan, and is the most suitable for local energy supply as the main axis of distributed power sources.

On a prefectural level, Fukushima Prefecture is progressing its vision of covering the primary energy demand of the prefecture with 100 % renewable energy by 2040. On a city level, Hamamatsu City holds the vision of the 2050 Hamamatsu City Area RE100 and is making efforts for the achievement of the goal. 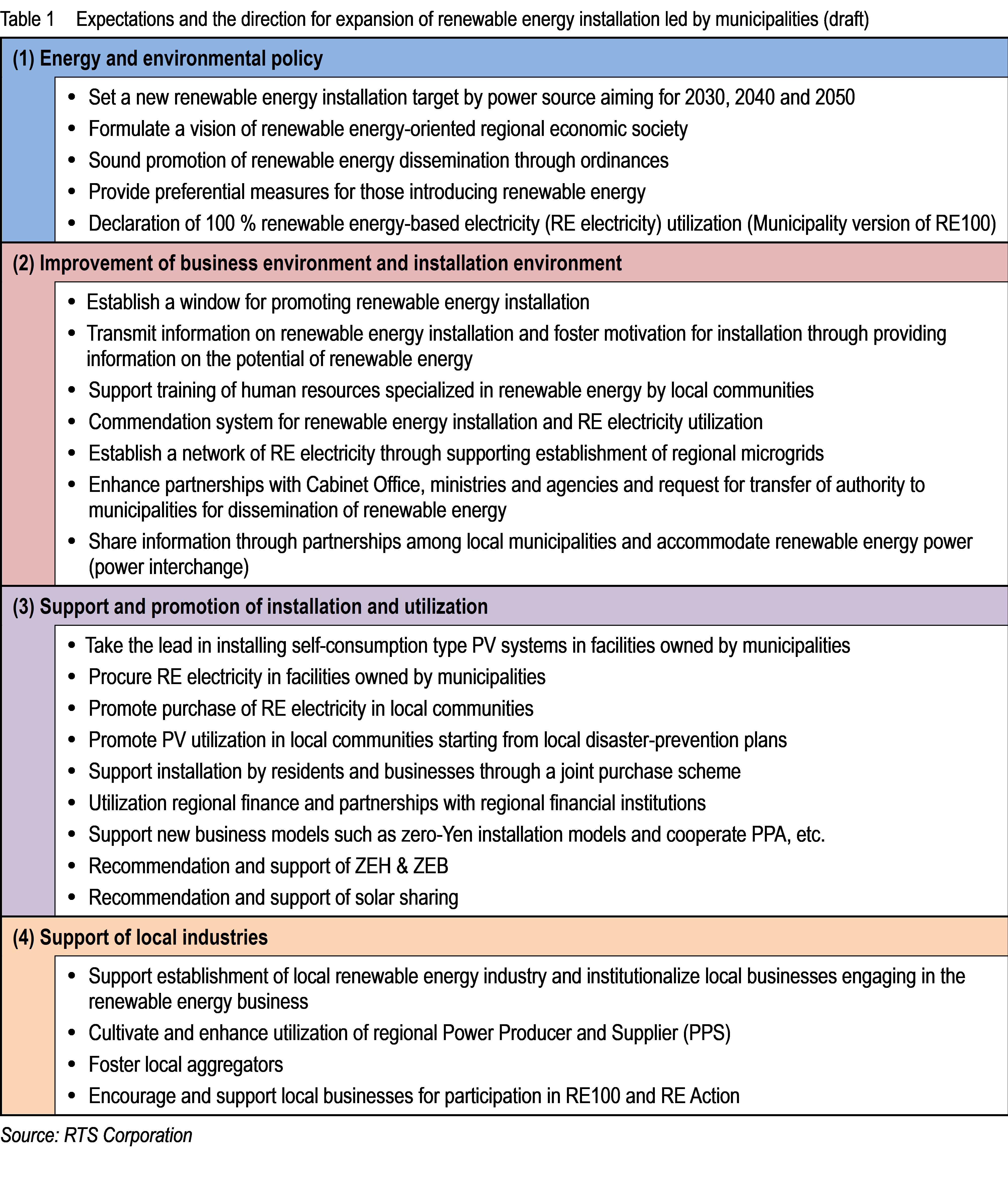