The 2020s have begun and the first year of the decade has ended. The world has been pressed with measures to tackle the expansion of COVID-19 pandemic, which caused unmeasurable damages on the global economy and daily life. However, there emerged a global trend of economic reconstruction based on the idea of “green recovery,” towards the recovery of the global economy. Year 2020 became a year for the world, including the US and China, to move towards realization of a decarbonized society. The major PV-related activities and movements in 2020 are shown in Table 1. IEA positioned PV as the “KING” of power source for reinforcement of power supply in the 2020s and the stable PV development is close to taking root. 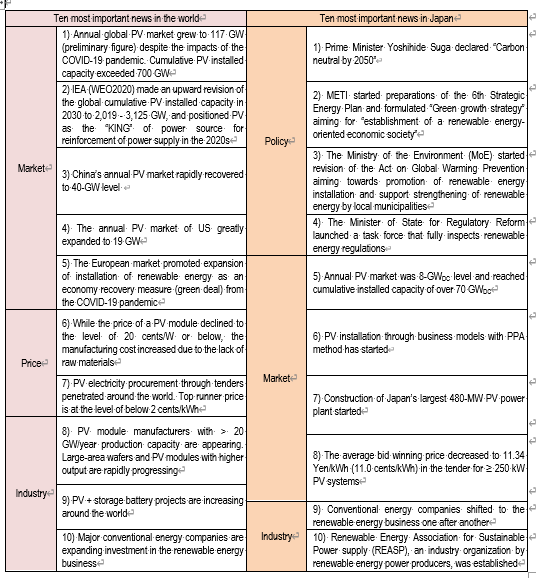 As for the global trends of the PV market, there were impacts of restrictions of economic activities due to the COVID-19 pandemic, however, the Chinese, Japanese, US and European market steadily transitioned, and the global annual installed capacity increased from 111 GW in 2019 to 117 GW (preliminary) in 2020. The Chinese market that had driven the growth of the global PV market shifted from a negative growth for two consecutive years to a positive growth once again, and recovered to the 40 GW-level. The US market is also in a growing trend supported by utility-scale PV projects, and grew to the 19 GW-level.

In the European market, installation is recovering in various countries led by Germany. In addition, future expansion of installation is expected driven by green recovering. Furthermore, the growing trends are maintained in Asia, Latin America, Africa, and the Middle East driven by the cost advantage of PV. In the PV industry, PV module manufacturers with > 20 GW/year level production capacity emerged, and investment in strengthening of production capacity and investment in improving output of PV modules are progressing mainly by Chinese companies.

While the price of a PV module has declined to the level of 20 cents/W, since there was lack of materials such as polysilicon and glass, there is a halt in the declining trend that had been consistently progressing in the past. PV installation by tenders is progressing globally, and the top runner for procurement cost is reaching below 2 cents/ kWh level. There is strong support from the financial industry, and the movement towards expansion of investment in the renewable energy generation business including PV generation, is expanding by major energy companies in the US and Europe.

Meanwhile in Japan, movement aiming towards a decarbonized society is accelerating due to the establishment of “Acts for Establishing Resilient and Sustainable Electricity Supply Systems” and “Carbon neutral by 2050” declaration by Prime Minister Suga. The Ministry of Economy, Trade and Industry (METI) started designing a new scheme and revision to the 6th Strategic Energy Plan aiming towards dissemination of renewable energy. The energy policies in Japan made a great turn towards “establishment of a renewable energy-oriented economic society” starting from 2020.

Furthermore, METI formulated the “Green growth strategy following carbon neutral by 2050” which makes renewable energy the main axis of mainstream power source. This growth strategy estimates that the power demand will increase by 30 % to 50 % by 2050 compared to today due to the promotion of electrification, and that 50 % to 60 % of all power will be covered by renewable energy. A high target was set for 14 industries that are expected to grow from the perspective of industrial policies that create “Virtuous Circle for Environment and Economy”, and a full-scale mobilization of all policies will be conducted.

PV is positioned as the next generation type industry in the domestic/ offices related industry, and will play a new role to promote cooperation with the user industries  in addition to its role as an energy source.

The Ministry of the Environment (MoE) started revision of the Act on Global Warming Prevention aiming towards promotion of renewable energy installation and support strengthening of renewable energy by local municipalities. The Minister of State for Regulatory Reform launched a task force that fully inspects renewable energy regulations, and started a reform of regulations from the policy side that will lead to expansion of PV dissemination.

In the Japanese PV market, new sales activities were greatly restricted due to the COVID-19 pandemic. However, as a result of steady progress of construction of projects which have not started operation such as MW-scale PV power plants and decline of installation cost, approximately 8 GW (DC) was installed in 2020, and the cumulative installed capacity is expected to have exceeded 70 GW (DC).

The dissemination method and industrial structure of the PV is starting to greatly change due to the introduction of the PPA business models by third party ownership (TPO) scheme and progress of shift from conventional energy business to renewable energy business. Further, recognition of the importance to shift to renewable energy power by power consumers is starting to deepen, and PV installation in in-house facilities led by power consumers is also expanding.

The carbon neutral declaration by Prime Minister Suga made clear the national target to ministries and agencies, municipalities, industry and finance that will play a major role in promoting renewable energy hereafter, and for its realization, the installation of renewable energy by top-down orders is expected to accelerate. The PV industry shall willingly take the responsibility and the role as the “KING” of the industry that supports green growth in the 2020s.