The drafts of the revisions to the “Strategic Energy Plan” and “Plan for Global Warming Countermeasures,” which form the basis of Japan’s energy and environmental policies, are scheduled to be approved by the Cabinet in October 2021, after inviting opinions from the nation and ensuring consistency between the two plans, leaving the upcoming matters entirely to the committee’ s Chairperson.

Deliberations on the revision of the draft of the Sixth Strategic Energy Plan started toward the creation of a renewable energy-oriented economic society, looking ahead to the future after the enforcement of the Acts for Establishing Resilient and Sustainable Electricity Supply Systems. This was followed by the declarations by Prime Minister Yoshihide Suga on “2050 Carbon Neutrality” and “46 % greenhouse gas (GHG) reduction in FY 2030”, which will significantly accelerate the shift to renewable energy in Japan.The target ratio of renewable energy power sources was raised to 36 % to 38 %, and as basic approaches toward this goal, thorough efforts to make renewable energy the main power source, the principle of giving top priority to renewable energy, curbing the burden on the public, and harmony with local communities were stipulated for the maximum introduction. In order to achieve the above, policy measures such as securing suitable sites, strengthening business discipline, cost reduction, integration into the market, overcoming the restrictions of electric grids, rationalization of regulations, and accelerating the promotion of technology development were also presented.

With the enforcement of the Acts for Establishing Resilient and Sustainable Electricity Supply Systems, it was planned to shift from expanding the introduction of renewable energy based on the FIT program to the phase of integrating renewable energy into the electricity market, as well as to promote to focus on the “quality” of renewable energy instead of the “quantity.” However, with the addition of the new target of 46 % GHG reduction in FY 2030, both “quality” and “quantity” are required at the same time. In particular, considering the time frame from now through FY 2030, PV power generation is drawing a great deal of attention among other renewable energy sources, and PV installation target of over 100 GW was set.

As shown in Figure 1, the target of PV installed capacity was set based on the “Current Policy Efforts Continuation Scenario” (87.6 GW), and in the “Enhanced Policy Efforts Scenario”, in which the related ministries and agencies participate to promote the introduction of PV systems, the target PV installed capacity was increased to 100 GW by adding “Public Sector Initiatives” (6 GW) and “PV Systems in Harmony with Local Communities” (4.1 GW) by the Ministry of the Environment (MoE) and “Renewable Energy Bases at Airports” (2.3 GW) by the Ministry of Land, Infrastructure, Transport and Tourism (MLIT). The “Ambitious Level” by materializing and accelerating new policies of the responsible ministries and agencies sets a target of an additional 13 GW or so, which makes the target share of PV power generation equivalent to 15 % of the total power generation amount in FY 2030 (about 140 TWh). Efforts are currently underway to secure policy backing for the additional 13 GW of installation.

Previously, the Ministry of Economy, Trade and Industry (METI) has been responsible for the development of energy policy and the introduction of renewable energy. However, with the expansion of the introduction of distributed power sources, mainly PV power generation, to the current scale, it will be difficult for METI alone to manage further expansion. Now that the “achievement of a 46 % GHG reduction” is added to “making renewable energy the main power source,” it will be impossible to achieve the target of more than 100 GW installation unless related ministries and agencies such as MoE, the Ministry of Agriculture, Forestry and Fisheries (MAFF), and MLIT share the responsibility of promoting dissemination of renewable energy in the areas of respective legislation, regulations, systems, and measures, rather than relying solely on the energy policy of METI. Fortunately, related ministries and agencies started to participate in the formulation of the Sixth Strategic Energy Plan. Each ministry is expected to address the following to promote the introduction of PV system; the enhancement of transmission networks, review of grid operation and self-wheeling rules, and utilization of distributed energy resources by METI; promotion of positive zoning which actively supports development of renewable energy projects by setting up zones for the promotion and taking the initiative in introducing PV systems to publicly owned facilities and land as part of the government’s action plan under the revised Law Concerning the Promotion of the Measures to Cope with Global Warming, and supporting the introduction of PV systems for self-consumption by private businesses through PPA by MoE; deployment of PV systems on farmland and review of the rules for the conversion of farmland to PV system installations by MAFF; and promotion of ZEB/ZEH for housing and buildings, and the utilization of space in infrastructure facilities (roads, ports, urban parks, railroads, etc.) to facilitate introduction by MLIT.

Related ministries and agencies are already working on the planning of measures and regulatory reforms of renewable energy in and after 2022, and new budget items to promote the measures are included in the budget request for FY 2022. With the Sixth Strategic Energy Plan and the new Plan for Global Warming Countermeasures as a new launching pad, it is necessary to clarify the “expansion of the introduction of PV system with the initiatives of the responsible ministries and agencies” through cooperation among the related ministries and agencies that are currently being established and make this expansion firmly established and strengthened. Thus, the predictability of market expansion will be improved, and the introduction of more than 100 GW of PV systems will become a “reality” rather than an “ambition”. The PV industry must also make a full-fledged effort to achieve the target in terms of market, cost, and technology as a core “responsible industry” that supports the 46 % GHG reduction in FY 2030. Achieving the ambitious level of PV installed capacity will be a touchstone for the “2050 Carbon Neutrality”. 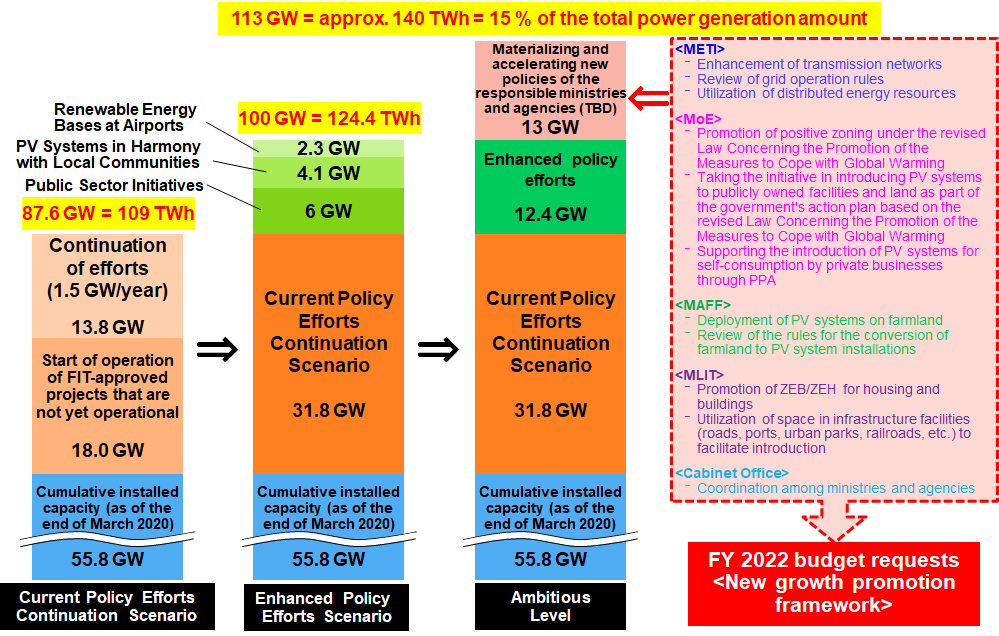