The Sixth Strategic Energy Plan (draft) and the Plan for Global Warming Countermeasures (draft) are both inviting public comments, entering into the final stage toward a Cabinet decision in October 2021. In the draft of the Sixth Strategic Energy Plan as of August 2021, the ambitious outlook for 2030 presented preliminary figures, but further detailed examination progressed. In the current plan (draft) which is inviting public comments, the “Ambitious Level” by strengthening measures by the responsible ministries and agencies is presented. The total amount of electricity generated in Japan, which was set in the 2030 outlook, is 934 TWh, of which the amount of PV electricity was set at 129 to 146 TWh, and the ratio to total power generation amount was set at 14 to 16 %. Since the ratios of the other four power sources are set at exact figures without range, the renewable energy target ratio of the 36 to 38 % range depends on the PV installed capacity. In the draft plan, it was intended to raise the PV ratio to about 15 % by further strengthening measures to the 100 GW Policy Enhancement Scenario. However, as the work on materialization of the Policy Enhancement Scenario progressed, 3.5 GW was added through the enhancement of measures for newly built houses by the Ministry of Land, Infrastructure, Transport and Tourism (MLIT), the Ministry of Economy, Trade and Industry (METI) and the Ministry of the Environment (MoE). Furthermore, 4.1 GW was added through the promotion of PV introduction in harmony with local communities by the Ministry of the Environment (MoE), Ministry of Agriculture, Forestry and Fisheries (MAFF), and 10.0 GW was added through the promotion of self-consumption by private companies by MoE, amounting to 14.1 GW addition in total. With these additions, the “Ambitious Level” aiming to achieve 103.5 to 117.6 GW (123 to 139 GW in terms of PV capacity) was set. The outlook for the PV installed capacity in 2030 presented this time means that approximately the same amount of PV systems will be introduced hereafter as the PV installed capacity at the end of March 2020 (55.8 GW, including 5.6 GW installed before the start of the FIT program), which was the starting point of the outlook.

Until now, the FIT program has been versatile in all sizes, applications, and regions, so there have been concerns over if the PV introduction will continue under the new scheme starting in April 2022. However, in response to the global trend toward carbon neutrality, Japan also started accelerating the shift to renewable energy, driven by the prime minister’s decision. In addition to the responses to the Acts for Establishing Resilient and Sustainable Electricity Supply Systems, the responses to achieve the 2030 target of 46 % GHG reduction will start, which indicates that the PV introduction has entered a new phase. As shown in Figure 1, in the draft of the Sixth Strategic Energy Plan, there are seven important points of responses to achieve the 46 % GHG reduction target. Activities which have not been considered so far will start moving in various fields. Renewable energy will shift to constitute the core of energy policy, and PV power generation will play a central role as the main axis of renewable energy. Then, with the efforts from the aspects of both energy and climate change measures, the introduction of renewable energy will be based on the combined deployment of the Sixth Strategic Energy Plan and the Plan for Global Warming Countermeasures. Among other renewable energy sources, PV has grown to the level of over 50 GW installed capacity, and it is difficult to continue the stable growth only with the energy policy by METI. It is essential that MoE, MAFF and MLIT also participate in supporting the introduction as responsible ministries. On the other hand, for PV power generation itself, thorough cost reduction including storage batteries and confidence and support from local communities and electricity consumers are indispensable. In order for PV to shift to become the main power source, it is inevitable to shift away from being a variable power source as soon as possible, integrated with the power storage technology. Furthermore, as an energy industry that is close to consumers, the PV industry must aim to form an industry that can support over 100 GW introduction.

Once the Sixth Strategic Energy Plan and the Plan for Global Warming are approved by the Cabinet, policy responses over renewable energy will be advanced at a stretch including the following: securing suitable sites for project development in harmony with local communities, strengthening business disciplines, cost reduction, integration into the market, overcoming grid restrictions, streamlining regulations, and promoting technological development. To realize this Ambitious Level, MoE, MAFF and MLIT will join as responsible ministries, under the leadership of METI, and structural changes in the PV dissemination in Japan will begin. The number of responsible ministries for the dissemination has increased from one to four, and by bringing together and making full use of laws, policy and regulatory measures, as well as budgets under the jurisdiction of each ministry, it will be possible to expand the introduction in the fields and the locations where PV has not been widely disseminated until now. Furthermore, if the introduction by local governments led by MoE begins, PV will possibly be disseminated throughout Japan. On the other hand, from the industrial perspective, the PV industry can play an industrial role in disseminating itself as a “responsible industry” if it promotes market formation, business formation, player formation, and system formation while trying to reduce costs and gaining support from consumers. New market environments have been created as well, such as the markets of business models using the PPA scheme, acceleration of ESG finance, and switching to renewable energy electricity. In order to shift to a carbon-neutral society, the PV industry should make its utmost effort on the challenge to surely achieve 14 to 16 % share of PV power in 2030 in collaboration with the responsible ministries and agencies by exercising all its efforts to achieve growth at a new dimension, or significant opportunities and development, that simultaneously improves quality and quantity as a power source. 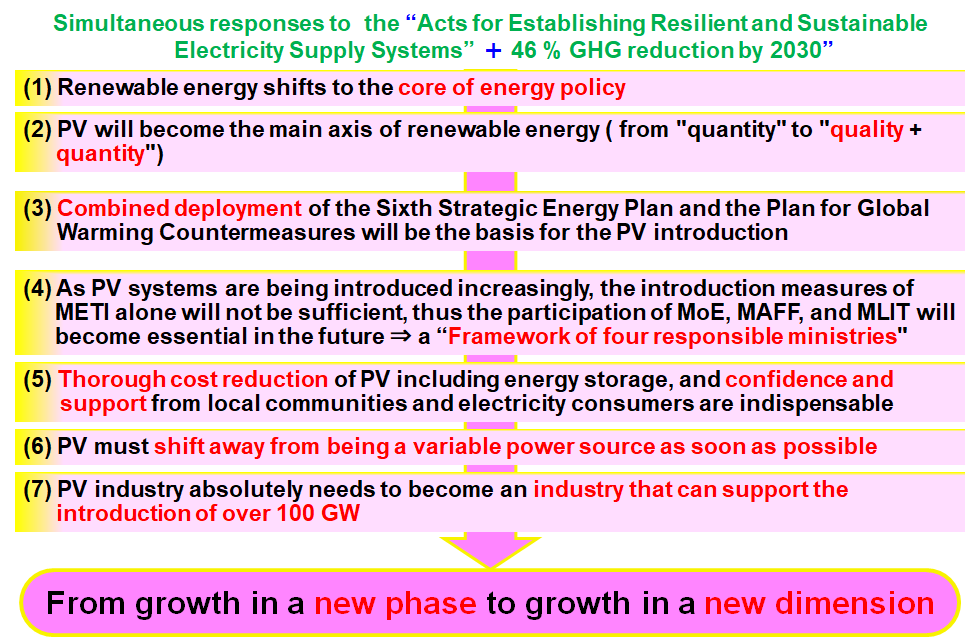