Downloads
HOME > Monthly Perspective > RTS estimates that annual PV installed capacity in Japan in 2030 will be 9.0 to 14.7 GWDC

Fiscal Year (FY) 2022 has begun in April 2022, and the Acts for Establishing Resilient and Sustainable Electricity Supply Systems and the revised Law Concerning the Promotion of the Measures to Cope with Global Warming came into force. In order to achieve a 46% reduction in greenhouse gas (GHG) emissions by 2030, the Ministry of Economy, Trade and Industry (METI) and the Ministry of the Environment (MoE), as well as relevant ministries and agencies, have collaborated to move from “planning to “acting”, and concrete initiatives for energy and environmental policies have started.

The support scheme for PV power generation will shift from the Feed-in Tariff (FIT) program, which allows power producers to sell all electricity they generate at a fixed price, to the Feed-in Premium (FIP) program, which provides power producers with a market-linked premium while allowing them to sell electricity on the market by themselves. The market will enter the stage where PV is integrated into the electric power market with a responsibility for supply. The dissemination environment for PV power generation will change significantly due to the transition to the new support scheme. In the Sixth Strategic Energy Plan, in addition to METI, MoE, the Ministry of Land, Infrastructure, Transport and Tourism (MLIT), and the Ministry of Agriculture, Forestry and Fisheries (MAFF) will promote measures to expand the PV introduction by making full use of measures, legal systems, regulatory reforms, etc. under the jurisdiction of these ministries as “responsible ministries”, as shown in Table 1. By adding measures and legal systems of each responsible ministry and agency based on the market that has been formed with the support of the FIT program so far, it will be possible to expand the PV introduction to the markets where the PV installations had been limited with the FIT program alone.

For the PV industry, strengthening policy efforts to expand the introduction of PV power generation by four ministries of METI, MoE, MLIT, and MAFF will serve as a guideline for future market development, and it will strongly boost PV introduction through cost reduction and new business models such as PPA. 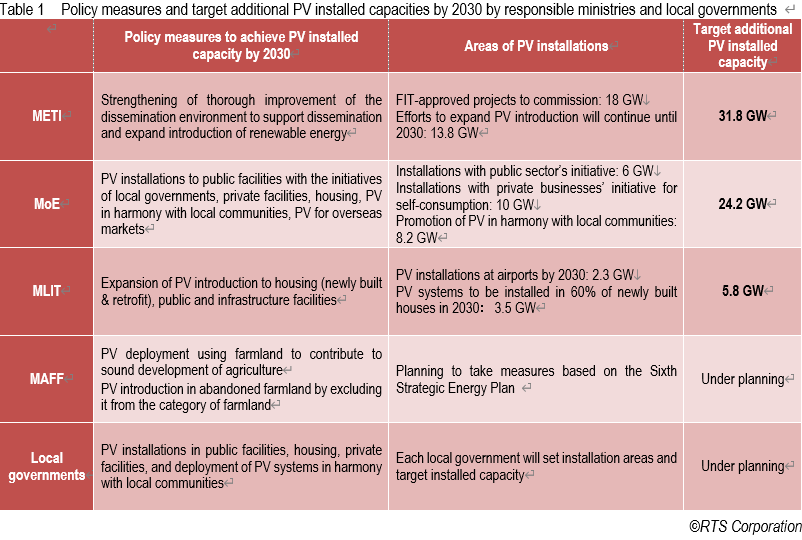 Assuming that the cost of PV modules and storage batteries will decrease reflecting international prices as the responsible ministries and agencies begin to introduce PV power generation, as shown in Figure 1, the annual and the cumulative PV installed capacity in Japan in 2030 will be 9.0 GWDC (6.7 GWAC) and 154 GWDC (121 GWAC), respectively under the BAU scenario and will increase to 14.7 GWDC (10.6 GWAC) and 180 GWDC (140 GWAC), respectively under the accelerated scenario. Under the BAU scenario, it was assumed that the ambitious level target of 117.6 GWAC in the “Sixth Basic Energy Plan” would become a “reality” with the all-out efforts throughout Japan. Under the accelerated scenario, it is expected that PV introduction will further grow as the introduction environment will greatly improve and progress by actively strengthening and speeding up various promotion and support measures, solving the issues through technological development, creating markets with new business models, and establishing conversion to green power. The introduction will accelerate from the viewpoint of emphasizing energy security as well. Until now, most of the PV installations were supported by the FIT program, but the introduction of non-FIT/FIP PV systems with new business models such as PPA has begun, and from 2025, the share of non-FIT/FIP PV systems is expected to grow rapidly, reaching just under 90% by 2030.

In response to the expansion of the PV installed capacity, the PV industry in Japan currently relies on the PV modules supplied by Chinese companies. Manufacturers of PV-related products around the world, mainly Chinese companies, are increasing their production capacities in all fields of silicon feedstock, ingot, wafer, PV cell and module, but recently the price of PV modules has risen as the global demand has been growing rapidly. In addition, the Ukraine crisis is expected to accelerate the introduction of PV power generation around the world and weaken the yen, and it is feared that it will be a major obstacle to the procurement of PV modules. Although companies are currently developing technologies for next-generation solar cells, it is expected to take a much longer time to reach mass production and pose a risk to expand the PV introduction. It will also be necessary for Japan to hold joint consultations among the circles of industry and academia on how Japan will achieve stable procurement of PV modules for the time being. 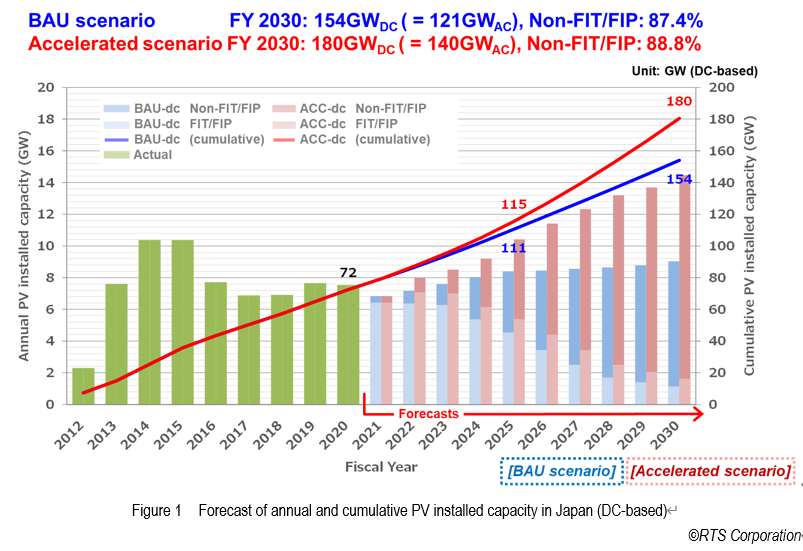