Introduction of renewable energy intensively in the regions of Japan by local governments is starting, which was adopted as part of the “Development of leading areas of decarbonization” promoted by the Ministry of the Environment (MoE) from FY 2022. In contrast to the PV introduction under the FIT Act so far, a new form of introduction based on the revised Law Concerning the Promotion of the Measures to Cope with Global Warming is about to be born. Under the FIT Act, the PV introduction was expanded through business plan approval on an individual basis, but in the project of leading areas of decarbonization, it will be a comprehensive and intensive PV introduction through the selected areas with the initiatives of local governments. The financial resources for the introduction will change from the renewable energy surcharge paid by electricity consumers to the renewable energy promotion grant established based on the revised Act on Promotion of the Measures to Cope with Global Warming.

The MoE is scheduled to select about 100 areas for decarbonization by 2025, and this was the first time the municipalities were selected. Out of 79 entries, 26 municipalities from 19 prefectures were selected as the leading areas of decarbonization based on the criteria of innovative spirit, exemplarity and feasibility, as shown in Table 1. From the northernmost Hokkaido Prefecture down to the Kyushu region, and from metropolitan areas to agricultural, mountainous, and fishing villages as well as remote islands, a wide variety of plans were presented according to regional characteristics. The leading areas of decarbonization aim for net zero CO2 emissions associated with electricity consumption in the private sector such as households and offices by 2030. This is expected to be a model of creating a decarbonized society on a regional basis. Since “installation of renewable energy facilities (self-consumption type, in harmony with and beneficial to local communities)” is essential as a condition for selection, most of the plans are based on PV installations on housing, private/public facilities, land owned by the city, reservoirs, farmland, etc., and the planned PV installed capacity has reached a total of 150 MW. The planned PV installed capacity in each municipality selected varies greatly depending on the scale and situation of electricity demand in the leading areas of decarbonization, ranging from 190 kW to a maximum of 19,100 kW.

The projects selected this time cover not only renewable energy facilities but also the installation of storage batteries, private power lines, etc., and the introduction of CO2-saving equipment, taking advantage of the characteristics and strengths of the region, achieving a high degree of freedom to realize decarbonization. It can also be said that it is an “energy renovation project in the region” that converts the existing energy infrastructure into local production and local consumption of renewable energy. The national development of regional decarbonization at the social implementation level making full use of renewable energy, power storage, and energy conservation is a pioneering initiative in the world. With the intensive regional introduction method as a new driving force, the nationwide “decarbonization dominoes” by municipalities that MoE aims to expand nationwide must be developed greatly.

For the PV industry, a business model of “stable supply of renewable energy  electricity in local communities collectively” using the PPA model for municipalities promoting decarbonization may be considered.

RE100 by private companies is spreading worldwide, and the number of Japanese companies participating in RE100 is increasing year by year in recent years. However, RE100 on a regional basis is still to come. Through the development of leading areas in decarbonation, we will be able to disseminate the circle of the RE100 initiative by local communities and municipalities from Japan and expand it to the world.

The second round of public offer for the leading areas of decarbonization will begin in July 2022. Based on the projects selected in the first round, the level of regional decarbonization models should be improved and diversified, so that the new development of renewable energy should be boosted, aiming to solve the issues through intensive regional introduction, and improve the energy self-sufficiency rate. 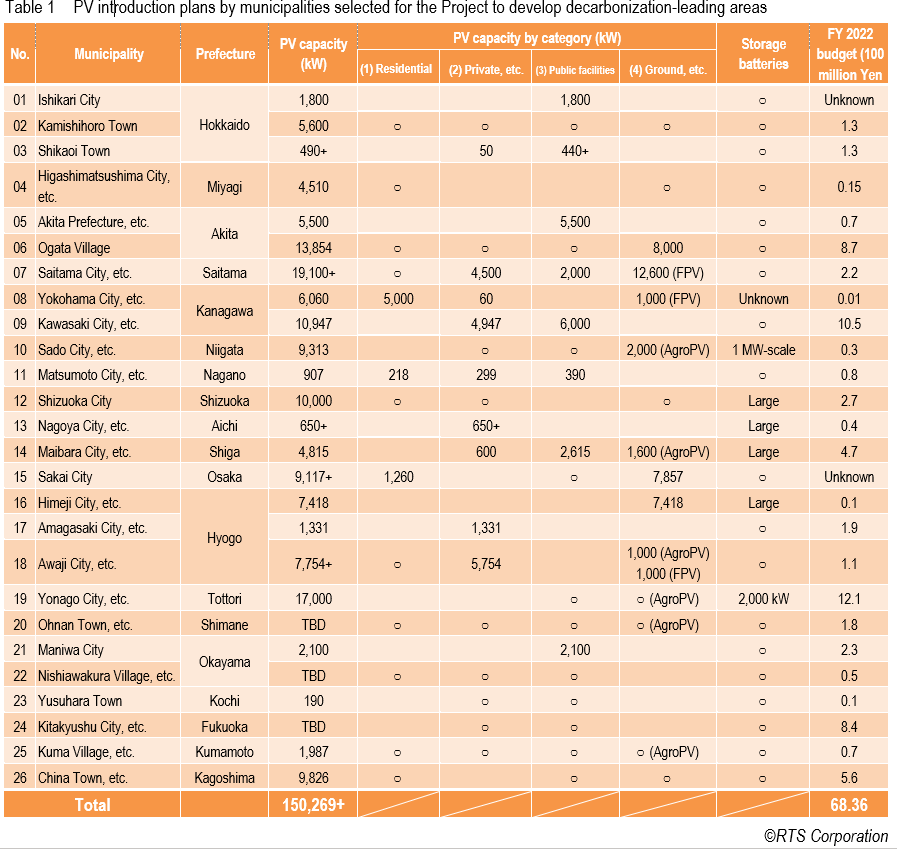