The Japanese government approved the “Regulatory Reform Implementation Plan” at a Cabinet meeting in June 2022, which sets the environment field as one of the pillars of the implementation items for the second consecutive year. The subjects of the regulatory reform in the environment field consists of 11 items, and the contents, implementation period, and responsible ministries of the regulatory reform for each item are shown in detail. These regulatory reform initiatives in the environment field are based on the past deliberations with relevant ministries and agencies at the “Task Force for comprehensive review of regulations, etc. on renewable energy” established in November 2020 presided over by the Minister of State for Special Mission of the Cabinet Office. The Task Force comprehensively reviews regulations, etc. on renewable energy across the relevant ministries and agencies, including the voices of renewable energy business operators, and is engaged in activities related to the regulatory reform aimed at expanding the introduction of renewable energy from a broad perspective, including making renewable energy a main power source and introducing it to the maximum extent, promoting decarbonization, curbing the burden on the public, expanding the options for electricity consumers, and ensuring international consistency and international standards.

Since its inception, the Task Force has held 22 meetings with relevant ministries and agencies, mainly the Ministry of Economy, Trade and Industry (METI), the Ministry of the Environment (MoE), the Ministry of Land, Infrastructure, Transport and Tourism (MLIT), and the Ministry of Agriculture, Forestry and Fisheries (MAFF), to analyze factors that hinder the dissemination of renewable energy in various areas, such as location constraints, grid constraints, market constraints, and coexistence with local communities, and to encourage deregulation to expand the introduction of renewable energy. These results are reflected in the Sixth Strategic Energy Plan, and improvements have been made to connect to the grid and curtail output, make effective use of farmland, strengthen energy-saving standards for houses and buildings, and review the safety and security regulations related to the Building Standards Act and the Electricity Business Act. In the Regulatory Reform Implementation Plan in this regulatory reform, under the principle of giving top priority to renewable energy based on S+3E, the maximum introduction of renewable energy is positioned as an important factor while striving to curb the burden on the public and coexist with the local communities. METI has reviewed the system for the spread and expansion of demand response, etc., the ideal form of regulations and systems for expanding the introduction of renewable energy in harmony with the local communities, and the review of safety and security regulations related to the Electricity Business Act. The regulatory reform to promote the expansion of the introduction of renewable energy will be advanced. Meanwhile, MLIT, MAFF, and MoE will introduce PV systems to the facilities under their jurisdiction and set target PV installed capacity, as shown in Table 1. For the PV industry, the target installed capacity will serve as a guideline for the future market development, and the regulatory reform is expected to pave the way for new markets and expansion of introduction.

The Renewable Energy Task Force’s indications of deregulation and requests for improvement from the relevant ministries and agencies are reflected in the Regulatory Reform Implementation Plan, and the speed of the regulatory reform by the relevant ministries and agencies has been remarkably faster than in the past. Through the Sixth Strategic Energy Plan, the responsible ministries (METI, MoE, MLIT and MAFF, the ministries responsible for PV expansion) have presented their targets for PV installed capacity to expand the use of PV power generation, and the Cabinet Office’s Renewable Energy Task Force has also become a driving force to generate markets and expand PV introduction through cross-ministerial regulatory reforms, and it can be said that the Cabinet Office is the fifth responsible ministry. In order to realize 60 GWac new introduction of PV systems toward 2030 on top of the cumulative PV installed capacity of 60 GWac in Japan, the regulatory reform based on the premise of safety, security, and stability is indispensable, and it will be a significant driving force for the PV industry and power consumers. We must have expectations for the role of the Renewable Energy Task Force in the future, and accelerate the expansion of PV introduction by responding to the regulatory reform and deepening cooperation among ministries and agencies. 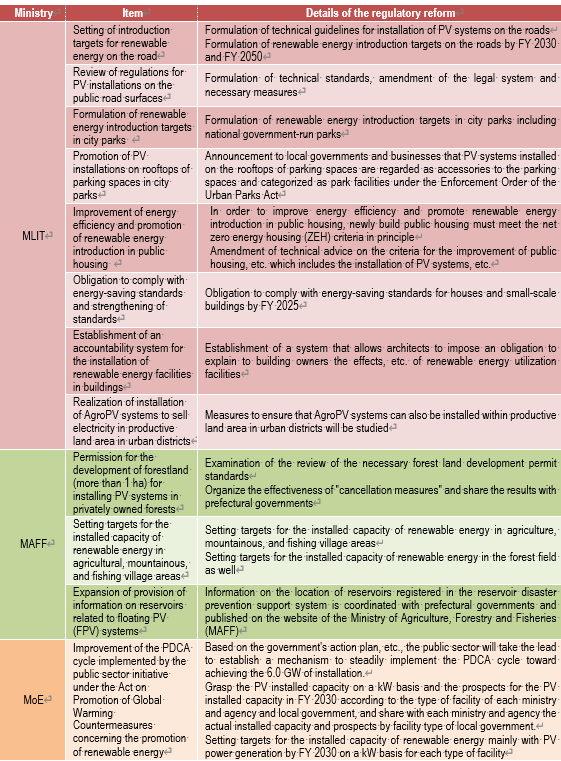